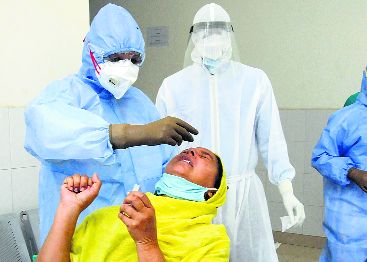 A health official collects a sample at a centre in Jalandhar.

With almost a three-fold increase in Covid cases in the past two weeks, the state seems to be heading towards second wave.

With almost 1,200 cases and 27 deaths in the past two days, the state seems to be inching towards September-like situation, when over 60,000 cases were reported. After September, there was continuous decline in cases. By January-end, the daily average of cases had come down to just 200.

Though health officials say there is no doubt the cases are dramatically increasing but vaccination can save situation.

“A significant section of society has already been vaccinated. Now in two days, it will open for the general population, which will help to stop further spread of the virus,” said Dr Rajesh Bhaskar, nodal officer for Covid.

The state reported 628 cases and 16 deaths on Friday and similarly, 595 cases and 11 deaths were reported today.

Even the number of casualities is increasing. In the district-wise break-up of casualities, Hoshiarpur district with four deaths remained worst affected. It is followed by Ludhiana with three deaths, Patiala two, Mansa and Tarn Taran one each. Apart from that around 79 persons are on oxygen support and 14 on ventilator support.