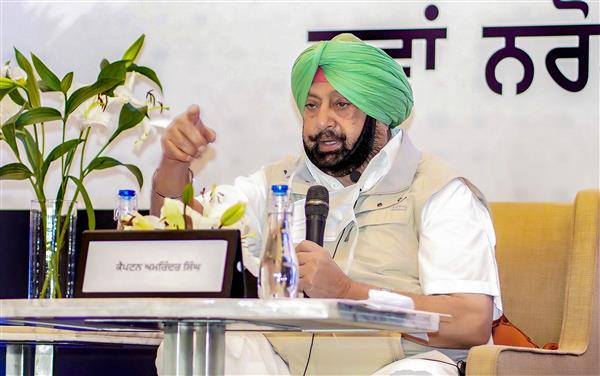 The Punjab Government will spend at least 30 per cent of funds under all government schemes for the welfare of the state’s Scheduled Caste (SC) population.

This was announced on Wednesday by Chief Minister Capt Amarinder Singh, along with a host of other measures for the uplift of the Dalit community as a mark of homage to Dr BR Ambedkar.

Paying tributes to the architect of the Indian Constitution on his 130th birth anniversary at a virtual state-level event, the Chief Minister also announced filling of the backlog of SC vacancies backlog in all departments on priority, while promising to explore a post-matric overseas scholarship scheme for SC students on the lines of the Baroda State Scholarship Scheme awarded to Baba Sahib under a scheme established by Sayajirao Gaekwad-III.

The Chief Minister announced a special Rs 500 crore Rural Link Roads Project for FY-2022. The project will encompass construction of new roads to the “bastis” of Scheduled Castes and other poorer sections of society that do not currently have road connectivity. Cremation grounds and places of worship would also be connected through the project.

Smart phones would be given to all Class-12 SC students in government schools. To motivate people to take up dairy farming, 150 village-level awareness camps and training at nine Training & Extension Centres would be conducted, with special emphasis on Scheduled Caste beneficiaries.

The government also proposed to provide 30 per cent reservation for SC applicants in villages under the “Har Ghar Pakki Chhat’ scheme, and also 30 per cent in the affordable housing scheme for EWS. A Dr B.R. Ambedkar Institute of Training at Jalandhar for competitive exams, including civil services, was also proposed under the GGRK mission. It would have 50 per cent seat reservation for SC candidates. Other projects planned include a Dr BR Ambedkar museum and a Dr BR Ambedkar Institute of Management on the PTU Campus in Kapurthala.

Captain Amarinder recalled that when Rajiv Gandhi contested for the first time from Amethi, after the death of his brother Sanjay Gandhi, the campaigning task was handed to him for one of the four areas in the constituency. “An SC youth who was deputed to help me wanted to get off the jeep before entering an upper-caste-dominated village, but I did not allow him to. He was standing next to me when the villagers offered me water, asking him to go out. But I made it clear that he would not go out alone. So I also left the place, telling them – “Votan pao ya na pao, appa jaa rahe hain”. (whether or not you give us votes, we are leaving!)

At the virtual event, Chief Secretary Vini Mahajan cited some of the steps taken by the government for Dalit welfare, while Cabinet Minister Sadhu Singh Dharamsot lauded the various measures taken by the government. His colleague Aruna Chaudhary appreciated the “revolutionary steps” taken for Dalit women and girls, while Charanjit Singh Channi stressed the need for the implementation of the 85th Amendment and regular recruitment of Dalits, along with reservation for Dalits in private schools, police department, AG office, and posts of board chairman.