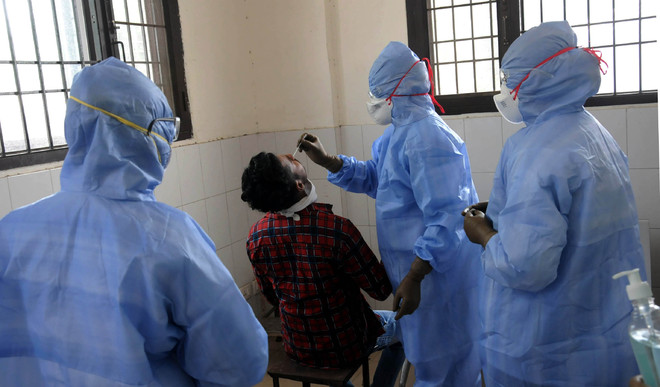 Health officials collect a swab sample at a centre in Jalandhar on Wednesday. Malkiat Singh

Even though active Covid cases nationally remained below 1.5 lakh today for the third straight day, settling at 1,46,907, the Centre deputed multidisciplinary teams to 10 states, including Punjab, showing consistent rise in daily cases for a week.

The state reported 566 Covid cases and eight deaths in the past 24 hours. Such high number of cases have been reported after a long time as for the past two weeks, the average daily cases has remained around 300.

As per a media bulletin released on Wednesday, the total number of cases has reached 1,79,819 and number of deaths reached 5,786.

At present, 82 patients are on oxygen support and nine on ventilator support. The state reported eight deaths in the past 24 hours. In the district-wise breakup, Amritsar, Hoshiarpur and Kapurthala reported two deaths each, Ferozepur and Jalandhar reported one death each.

Multi-disciplinary teams have reached Punjab and other states for supporting the local administrations for targeted Covid response. The Centre today also wrote to the state to increase RT-PCR testing. In his letter to states, Union Health Secretary Rajesh Bhushan has exhorted focus on measures to break the chain of transmission and ensure that RT-PCR testing is amplified to flush out hitherto undetected cases. — TNS