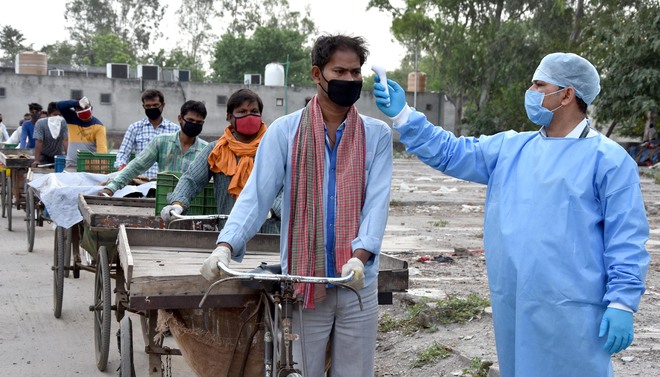 With 187 new Covid-19 cases reported today, the state count has reached 772. The bigger worry now is that frontline health workers have also started getting infected. The cases reported positive today include four ASHA workers from Moga, a laboratory technician and a ward attendant at a community health centre at Doda in Muktsar district.

Of the fresh cases, 53 were reported from Amritsar, 31 Hoshiarpur, 22 Moga, 21 each from Patiala and Ludhiana, 15 Jalandhar, nine Ferozepur, six Fatehgarh Sahib, three Muktsar, two SAS Nagar and one each from Gurdaspur, Sangrur, Ropar and Kapurthala.

Besides Amritsar, a major spike was seen in Hoshiarpur after 31 persons tested positive for Covid-19. All these are pilgrims who had returned from Nanded. At least 32 such persons have been quarantined at various centres since their return from Nanded. The tally of Covid-19 cases has reached 44 in the district.

Another alarming rise in the number of cases was reported from Moga. According to health officials, 22 new cases came to the fore on Saturday, taking the total to 28. A senior official said 17 of them were Nanded returnees and four ASHA workers. One NRI, who had come from Dubai, has also tested positive.

In Muktsar, a laboratory technician, a ward attendant at a health centre at Doda village and a combine harvester driver who had returned from Rajasthan to Doda village tested positive today.

As per the health department, so far samples of 24,868 suspected cases were sent for testing. Of these, 19,316 were found negative and reports of 4,780 were awaited.