Panel was formed to oppose illegal mining in area 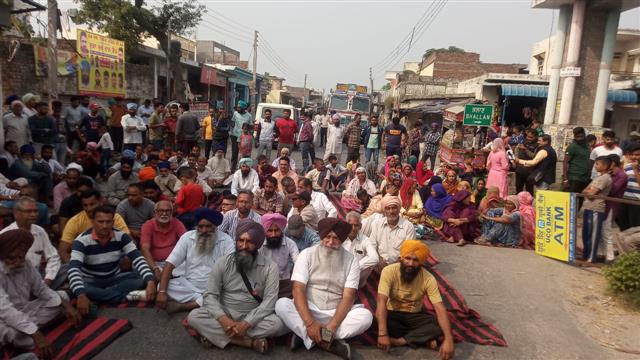 The Ilaqa Sangharsh Committee holds a dharna against desilting of Swan river at Bhallan. File photo

The committee had been formed by residents of several villages, including Bhalan, Bhanam and Taraf Majari near Nangal, to oppose illegal mining in the area.

The accused identified as Tikka Yashvir Chand, Vishal Saini, Hardev Singh, Jarnail Singh, Surinder Singh and Jaswinder Singh were at the forefront of the protest against desilting of the Swan river-bed by the state government near Bhallan village a few days ago.

On Friday, an audio clip purportedly of a conversation between the complainant and Vishal Saini, a committee member, had gone viral on social media. In the clip, there was a discussion over extortion by committee members. Yesterday at a press conference, a large number of stone crusher owners had levelled allegations of extortion against the six accused.

In his complaint, Dalbir Singh, who has a stone crusher near Algran village, said he used to get raw material from legally allotted quarries at Sansowal, Bhallan and Taraf Majari villages. He alleged that the accused, accompanied by more than a dozen unidentified people, intercepted their vehicles loaded with material. They threatened to stop them from ferrying the material till they were paid as per their demand.

In the complaint, Dalbir Singh alleged that the accused used to collect at least Rs 1 lakh from each stone crusher owner in the area per month.

Nangal SHO Danish Veer Singh said the police had started an investigation after registering a case under Sections 384 and 385 of the IPC against the accused.