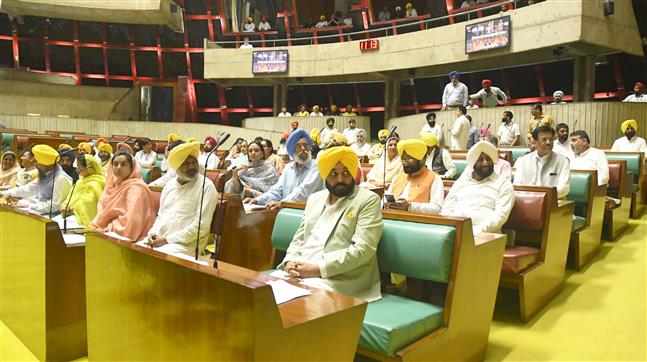 The Aam Aadmi Party government in Punjab today decided to hold a longer session of the Vidhan Sabha instead of the proposed daylong sitting slated for tomorrow. The decision, however, will have to be ratified by the business advisory committee (BAC) of the Assembly as it re-convenes on Tuesday, the third time after AAP came to power about six months ago.

On the eve of the session, Leader of the Opposition Partap Singh Bajwa wrote to Speaker Kultar Singh Sandhwan seeking a discussion on the SYL issue even as BJP state president and MLA Ashwani Sharma said they would hold a mock session at the party’s headquarters.

After a squabble between the Raj Bhavan and the government, Governor Banwarilal Purohit had yesterday approved the convening of the daylong session. He had withdrawn his earlier assent for the September 22 session after it became evident that the AAP regime “only wanted to bring a confidence motion” amid allegations that the BJP wanted to topple the government. The BAC has representation from various political parties, based on the numbers in the House. It has five members, with the Speaker, Parliamentary Affairs Minister and the Leader of Opposition being permanent and the other two being chosen each time before the session is convened. For the session beginning tomorrow, Finance Minister Harpal Cheema and Akali Dal MLA Manpreet Ayali have been nominated to the BAC by Speaker Kultar Singh Sandhwan. Dr Nachhatar Pal, lone BSP MLA, in is a special invitee to the BAC for the session. With 92 MLAs, AAP has a majority in the House as well as in the BAC. The committee, thus, can easily decide on prolonging the session, said a senior party leader.

Sources said while the party was undecided on bringing a trust vote, it was more inclined to debate threadbare the alleged covert operation to topple the government.

In its listed business, issued related to stubble burning, power distribution and GST are to be discussed in the Vidhan Sabha. Leader of Opposition Bajwa said issues such as the SYL dispute, sacrilege and police firing cases, law and order situation and the Rs 1,000 “guarantee” to each woman should also be discussed. He said the threat to national security posed by illegal mining, NGT slapping Rs 2,180-crore fine on the state, unabated stress-related deaths of farmers and the MSP on moong should also be raised.

To counter AAP, the BJP said it would hold a mock session at its state headquarters in Chandigarh where issues such as drug menace, illegal mining, etc., would be discussed. “We will not allow AAP to use the Vidhan Sabha to “please Arvind Kejriwal and will would oppose if they deviate from core issues,” said BJP state chief Ashwani.