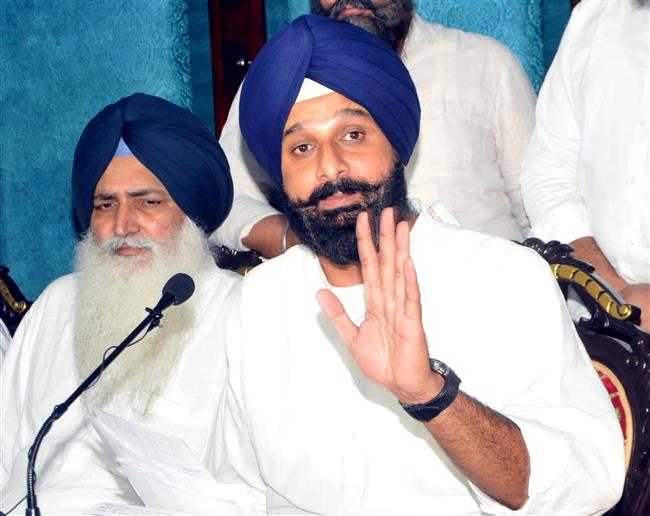 AAP leader Raghav Chadha on Sunday slammed the Charanjit Singh Channi government in Punjab for not arresting Akali leader Bikram Singh Majithia who has been booked under the NDPS Act.

Alleging that Majithia is “roaming around openly”, Chadha claimed that pictures of the Akali leader surfaced on social media on Saturday showing him paying obeisance at the Golden Temple.

The Aam Aadmi Party (AAP) leader alleged the Channi government did not want to arrest Majithia as there was a “setting” between it and the Badals.

Even as the Punjab Police is hunting for Majithia, booked under the Narcotic Drug and Psychotropic Substance (NDPS) Act, his pictures at the Golden Temple complex in Amritsar went viral on social media.

The Youth Akali Dal, the youth wing of the Shiromani Akali Dal, shared the leader’s photos on its official Facebook page on Saturday.

The pictures surfaced at a time when the Punjab Police has been conducting raids to arrest Majithia, who is a former state minister.

Last month, Majithia was booked under the NDPS Act on the basis of a 2018 report of a probe into a drug racket in the state.

Addressing the media here on Sunday, Chadha said nearly two weeks have passed since the registration of FIR against the Akali leader but he has not been arrested yet.

It has been happening for the first time in the history of the country that an accused, whose anticipatory bail had been rejected, could not be arrested, he added.

“The accused (Majithia) has been “roaming around openly”, alleged Chadha.

“Yesterday, some pictures of Akali leader Bikram Singh Majithia surfaced on social media, showing him paying obeisance at the Golden Temple,” he said.

Despite CCTV cameras installed in and around the Golden Temple and the presence of the task force of the Shiromani Gurdwara Parbandhak Committee, the police could not nab him, Chadha said.

“The Channi government will neither arrest nor want to arrest Majithia as there is a setting between the government and the Badals,” he alleged.

The AAP leader alleged that Chief Minister Charanjit Singh Channi had given directions to the police not to arrest Majithia.

He alleged that the registration of FIR against the Akali leader was an “election stunt”.

AAP convenor and Delhi Chief Minister Arvind Kejriwal on Saturday had targeted the Congress government in Punjab, alleging that it does not have the courage to arrest Majithia.

A lookout circular, which prevents a person from leaving the country, had been issued against the former Punjab minister last month.

After Majithia’s anticipatory bail plea was rejected by a Mohali court, he had moved the Punjab and Haryana High Court. —PTI