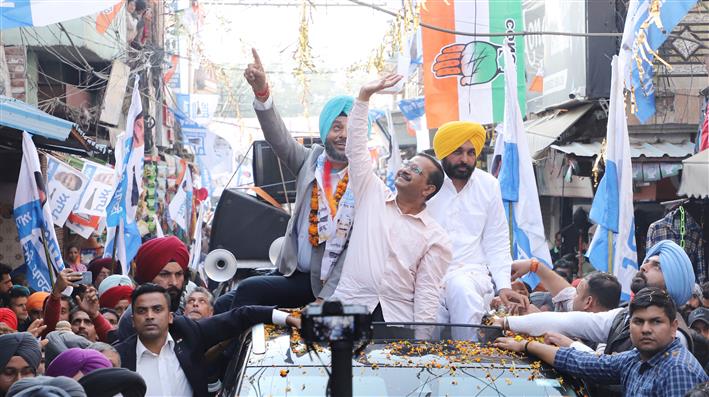 Carrying out a roadshow in an open vehicle, AAP convener Kejriwal promised a grand temple dedicated to Guru Ravidas in New Delhi. “The Delhi Government wishes to build a grand temple of Guru Ravidasji Maharaj, but the Centre has some issues with it. After finding a solution, we will build the temple,” he said.

Kejriwal exhorted the electorate to ensure that the party won at least 80 seats for a “strong government”.

“TV surveys are predicting that the AAP will win 60 to 65 seats. With this mandate, the AAP will form the government. But this is not enough. You (voters) have to strengthen Bhagwant Mann. You have to make a strong government. At least 80 seats should fall in AAP’s kitty. Everyone should vote on February 20. If all vote, the AAP will cross the 80 mark,” he said.

The AAP, meanwhile, made announcements to woo industry in Punjab. Kejriwal and Mann said if the party was voted to power, all necessary steps would be initiated to bring back the industrial units that had shifted to other states. The industry and trade would be a partner in government, they said.

Kejriwal promised to eliminate the “inspector raj” from the state and provide an industry-friendly atmosphere to the business community if voted to power.

“How will industry and trade flourish when the political party in power seeks cuts in profits? So many industrialists complain about the system. In our government, anyone, be it an MLA or a minister, found harassing industrialists will not be spared,” Mann said.

I assure voters the AAP government will take all possible steps to make Amritsar a world icon city and fulfil all wishes of Punjab’s people. Arvind Kejriwal, AAP convener