Kumar, president of Majdoor Adhikar Sanghathan, was held a few days after the arrest of Kaur 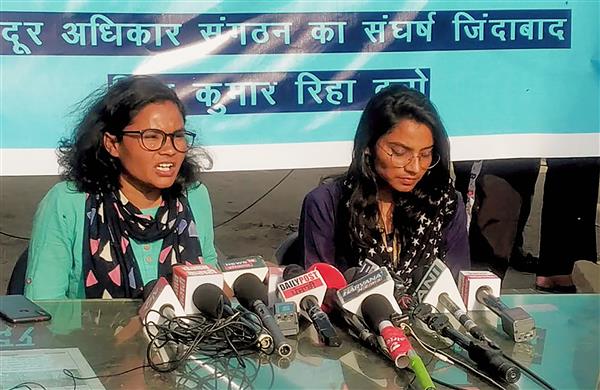 Nodeep Kaur, labour rights activist who was released on bail Friday, addresses a press conference at Singhu border, where farmers are agitating over new farm laws, in New Delhi, on Saturday, February 27, 2021. PTI

A day after she was granted bail, labour rights activist Nodeep Kaur on Saturday urged people to raise voice for the release of Shiv Kumar, who is a co-accused in criminal cases registered against Kaur.

Kumar, president of Majdoor Adhikar Sanghathan, was held a few days after the arrest of labour rights activist Kaur.

She was arrested on January 12 in connection with a case filed under attempt to murder and some other charges, including allegedly gheraoing an industrial unit and demanding money from the company.

“Shiv Kumar is in jail even today. No one is talking about him. He is innocent. He was severely beaten up by the police, his bones are broken. I request people to raise voice for his bail as well,” said Kaur during a press conference at Singhu border.

A medical examination of Kumar conducted by a Chandigarh-based hospital has found two fractures on his hand and foot along with some broken nail beds on his toe.

Kaur, who rejoined the farmers protest at Singhu border on Saturday, said the ongoing movement has space for everyone to contribute, whether it is farmers or workers.

Talking about her case, Kaur claimed she has done nothing wrong and that police have no evidence against her.

She also accused the police of beating her up in the custody.

“They abused me, pulled my hair, slapped me and made me sign papers forcefully. I couldn’t even walk,” she alleged.

In her bail plea also, the 23-year-old activist had claimed to have been severely beaten up at a police station after she was arrested by the Sonipat Police on January 12.

However, police have denied the charge as “baseless”. PTI