After Manpreet Badal's induction in BJP, all eyes on Bathinda Mayor's post : The Tribune India

After Manpreet Badal's induction in BJP, all eyes on Bathinda Mayor's post 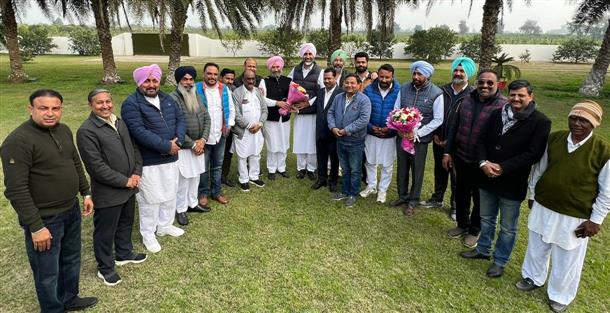 The fight between Congress and the Manpreet Badal group to get the Bathinda Mayor’s post has intensified after the former Finance Minister joined the BJP.

After returning from Delhi, Manpreet today held a meeting with councillors at his residence in Badal village. Around 20 councillors, including Mayor Raman Goyal’s husband and Deputy Mayor Harmander Singh Sidhu, were present.

Similarly, Congress leaders, headed by its Bathinda Urban DCC president Rajan Garg, also held a meeting with councillors and leaders. The Congress claimed that 26 councillors were present at the meeting.

Talking to The Tribune, Deputy Mayor Harmander Singh Sidhu said, “We stand by Manpreet. In the coming days, we will talk to our supporters and make a decision regarding joining the BJP.”

Garg said, “As many as 26 councillors were present at our meeting and a few of them told me they are with the party but as Manpreet had invited them, they are going to meet him”.

Garg also said if the Mayor would indulge in anti-party activities, the party would remove her. In the 50-member House of the MC, the Congress had 43 members, out of which Jagroop Singh Gill had resigned after he was elected as MLA on AAP ticket. Sukhdeep Singh Dhillon, who is also a relative of Jagroop Singh Gill, also joined AAP. SAD has seven councillors.

It is also learnt that many councillors are not opening their cards yet as they are in dilemma over the sudden joining of Manpreet in the BJP.

Moreover, it is learnt that the two-third majority is required to change the Mayor, so it seems that the Congress alone can’t remove her. It needs the support of SAD and AAP councillors. It will be interesting to see how things will unfold in the coming days in the Bathinda MC.