After private hospitals, Ayushman scheme comes to standstill in government institutions in Punjab : The Tribune India

As Arogya Mitras stop working due to non-payment of salaries, Ayushman patients left in lurch 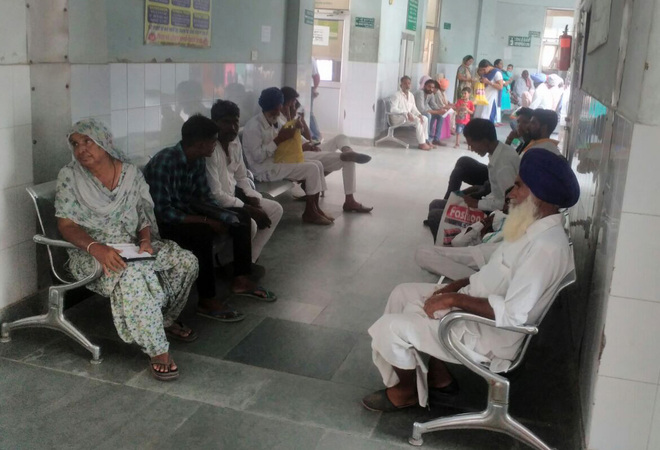 Beneficiaries of the health insurance scheme, Ayushman Yojna, are facing a double whammy as private hospitals had already closed their door for them and now ‘Arogya Mitras’ in government hospitals have also stopped assisting them.

As many as 150 ‘Arogya Mitras’ — deployed at government hospitals to assist the beneficiaries of Ayushman Yojna —stopped providing their services because they haven’t got their salaries for the past two months now. They were there to lend a helping hand to the scheme beneficiaries so as to make them easily get the treatment.

Consequent upon their protest, the Ayushman Bharat Mukh Mantri Sehat Bima Yojna scheme has come to a standstill in all government hospitals across the state. The scheme ensures a cashless heath treatment upto Rs 5 lakh to the card holders.

Sadly, the private empanelled hospitals had already closed their door for the eligible beneficiaries of the health scheme after the government failed to reimburse the outstanding amount.

The Arogya Mitras, who have not got their salaries since June, have stopped processing Ayushman cards of the beneficiaries from Tuesday. The protesting employees claimed that the outsourcing agency — MD India — had not received funds from the State Health Agency, which is the nodal agency for the implementation of the scheme in the state.

One of Arogya Mitras, pleading anonymity, said, “We had no other option but to go on strike since we are without salaries. The government should immediately intervene and make the payments to the MD India.”

The patients admitted under the scheme at various hospitals have been left in lurch since they are not able to continue their treatment. Also, the patients who need a discharge can’t proceed as they need a clearance from Arogya Mitra who have stopped working.

Bhupinder Singh, a kin of the beneficiary patient Charanjeet Kaur from Mansa, said, “Our patient is admitted at Govermnet Rajindra Hospital and is very serious. We need to get the treatment done. However, Arogya Mitra has refused to process the card. We cannot afford expensive lab tests.”