After severely deficient monsoon in Punjab and Haryana during August, forecast for subdued rainfall activity this week : The Tribune India

After severely deficient monsoon in Punjab and Haryana during August, forecast for subdued rainfall activity this week 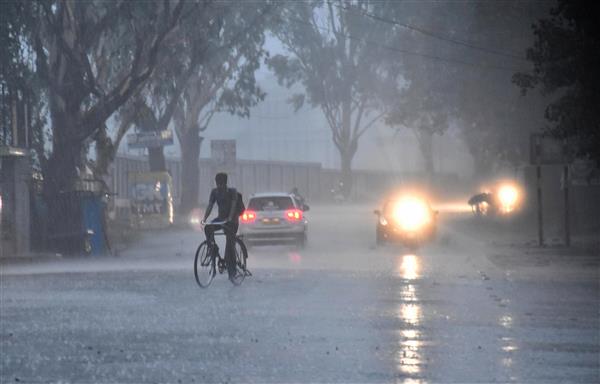 As the monsoon nears its withdrawal phase, the weather office has forecast the possibility of “subdued” rainfall activity over northwest India during the next five days even though; rain during the month of August has been severely deficient in the states of Punjab and Haryana.

“Isolated or scattered light to moderate rain over western Himalayan region during the next three days and fairly widespread to widespread rain during subsequent two days with isolated heavy falls and thunderstorm and lightning is very likely over Jammu and Kashmir, Himachal Pradesh and Uttarakhand on September 4,” a bulletin issued by the India Meteorological Department said on Wednesday.

Rain has been deficient by 59 per cent in Punjab and by 52 per cent in Haryana during this month. From August 1 to August 30, Punjab received 58.5 mm rainfall while Haryana received 69.2 mm against the normal of 143.9 mm for both states for this period.

In Himachal Pradesh, rain was a notch below the long period average. The hill state received 247 mm rainfall as compared to the normal of 251.7 mm during the aforementioned period.

Faridkot and Nawanshahar in Punjab and Sirsa and Mewat in Haryana were the only two districts in each state to receive surplus rain in August, while in Himachal, the districts of Kullu, Mandi, Shimla, Solan and Chamba received above average rain.

As far as the entire monsoon season is concerned, rain has been below par in all three states so far. The shortfall is 12 per cent in Punjab, seven per cent in Haryana and five per cent in Himachal, according to the IMD data.

Some parts of the region had experienced spells of heavy rain during the past few days, with Himachal Pradesh reporting heavy damage in some areas of the state. Monsoon generally begins to withdraw from northwest India during the first or second week of September.