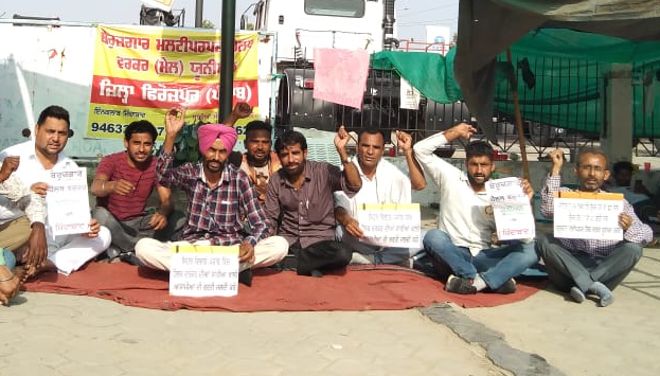 Protesters near the residence of CM Bhagwant Mann in Sangrur.

Chief Minister Bhagwant Mann’s hometown Sangrur has become the epicenter of protests in the state, with five different organisations holding sit-ins near his local residence on the Patiala road and three members of Temporary Teachers’ Union (TTU), Punjab, protesting atop a water tank at the Civil Hospital.

Many members of these protesting unions are contemplating to oppose the AAP candidate in the Sangrur Lok Sabha byelection if the government fails to look into their demands quickly.

AAP leaders had assured us govt jobs once it assumed power. But the same leaders are now unwilling to meet us. We are planning to oppose the AAP candidate in the Lok Sabha byelection. —Sukhwinder Dhilwan, President, UMPHWU

The members of 2016 Police Recruitment Struggle Committee, corona warriors from Patiala, PRTC Contract Workers’ Union Azad and Clerk Test Pass Union have been protesting for the past several days. After a march on Sunday, members of the Unemployed Multi-Purpose Health Workers’ Union (UMPHWU) also launched an indefinite stir.

Besides, three members of the Temporary Teachers’ Union, Punjab, have climbed atop a water tank in the Civil Hospital, demanding regularisation of their services.

“Ahead of the Assembly elections, AAP leaders assured to give government jobs to us once it assumed power. But the same leaders are now unwilling to meet us. We along with other unions are planning to oppose the AAP candidate in the Lok Sabha bypoll if the government doesn’t’ look into our demands,” said Sukhwinder Dhilwan, president, UMPHWU.

Protesters have been busy finding old videos of AAP leaders, wherein they made big claims to help them in getting jobs. Many have been regularly sharing those old videos to remind AAP leaders about their promises.

“We have been working in various government schools since 2003 on meagre salaries. We are not able meet our expenses. We will not end our protest till the acceptance of our demands,” said TTU member Balkar Singh, who, along with two other members, has been sitting of atop a water tank since Saturday.

Some senior police officers said they had received information that some more organisations were likely to start protests to press for their demands.