Pointing towards the massive build-up of security in the city, Akal Takht officiating Jathedar Giani Harpreet Singh, during his customary address to the Sikh community from Akal Takht’s podium on the 38th anniversary of ‘Operation Bluestar’, said Sikhs didn’t need security and every Sikh should learn the use of modern weapon.

Expressing concern over the spread of Christianity in Punjab, the Jathedar said the need of the hour was to propagate the Sikhism, especially in the rural border belt.

“Villages along the border are seeing a spread of Christianity and mushrooming of churches. It is high time for Sikh organisations to come out of the AC rooms to propagate the Sikhism and counter it,” he said.

“Apart from getting trained in the traditional Sikh martial arts such as gatka, we should focus on setting up shooting ranges too to get proficiency in operating modern weapons. The others are getting training in weapons secretly, we should get it openly,” said the Jathedar. 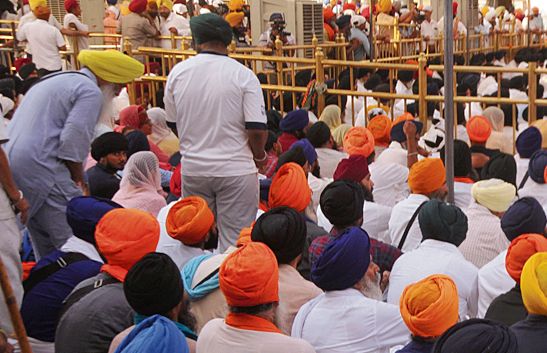 He said a conspiracy was being hatched to make the Sikhs religiously, economically and socially weak to keep them away from ‘raaj’ (rule).

The Jathedar talked about ‘Raaj Karega Khalsa’, a slogan representing the Sikh idea of sovereignty, which is recited at the conclusion of an Ardas. “A Sikh, who has partaken amrit, can never shun the concept of the Sikh rule. Yet, if we say raaj karega Khalsa, we will have to first become Khalsa,” he said.

Thousands of devotees early in the morning thronged the Akal Takht to attend the ‘bhog’ of religious prayers that began on June 4.

The prayers were held to mark the anniversary of ‘Operation Bluestar’ that was carried out in June 1984 by the Army to flush out heavily armed terrorists from inside the Golden Temple complex.

Akal Takht Jathedar and SGPC officials honoured the families of those who were killed during ‘Operation Bluestar’. During the event, posters of Jarnail Singh Bhindranwale and Khalistani flags were seen inside the Golden Temple (Sri Harmandir Sahib).

The police have imposed Section 144 around the shrine and carrying of any kind of weapon was prohibited, including ‘kirpan’, yet a liberal approach was taken towards ‘kirpan’, apparently considering it as a religious symbol.

SGPC chief Harjinder Singh Dhami justified the statement of Giani Harpreet Singh’s address, saying the Sikh youth should be trained in traditional martial arts and modern weapons. He said the Jathedar’s reference was related to the ‘shastra vidya’, which has been part of the Panth.

Amritsar: Parallel officiating Jathedar Dhyan Singh Mand snubbed the SGPC for being puppet of its ‘political bosses’, referring to the SAD. Mand said the Sikh Panth and Punjab had been at the receiving end for a long time.

Amritsar: A man was held for allegedly hurting religious sentiments after he spat tobacco into the holy sarovar at the Golden Temple. He has been booked under Section 295 of IPC.