Alarm as locusts spotted near border : The Tribune India 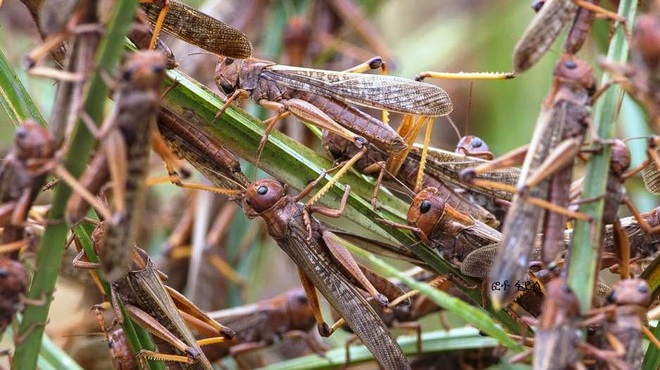 The threat of locust invasion still looms large over the region as a swarm of 2x2 km attacked some villages in Gharsana block of Sriganganagar district in Rajasthan on Saturday. These villages — 3 MLD, 4 MLD, 7 MLD, 26 AS and 28 AS — are about 150 km from the Punjab-Rajasthan border.

Jalour Singh, Chief Agriculture Officer, Muktsar, said, “Residents of the villages had timely informed the authorities. So the situation was controlled.”

Notably, this is the second time in over a week when locusts have reached close to the Punjab border. Earlier, locusts had attacked Guluwala, Pilibanga areas of Hanumangarh district in Rajasthan. However, due to the change in the wind direction, the locusts, too, had changed their direction.

Notably, locusts can fly about 150-200 km daily and are very harmful to crops.

The Punjab Agriculture University (PAU) has issued an advisory and stated that the movement had started because of rainfall in desert areas.

Sources in the Agriculture Department said the primary threat was to areas of Fazilka, Muktsar and Bathinda districts, which are located close to Rajasthan. “At present, the locust swarms which entered India from Pakistan have caused losses in Rajasthan, Gujarat, Uttar Pradesh, Madhya Pradesh and Maharashtra. Like Punjab, the governments of Haryana and Himachal Pradesh are also on alert,” an official said.

Locusts can fly about 150-200 km daily. Sources in the state Agriculture Department say the primary threat is to some areas of Fazilka, Muktsar and Bathinda districts, which are located close to Rajasthan.