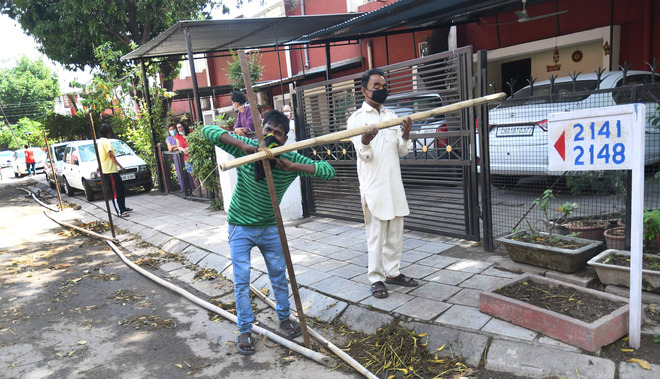 A containment zone being prepared at Sector 27 in Chandigarh on Wednesday. Manoj Mahajan

The Post Graduate Institute of Medical Education and Research (PGI) today issued a clarification on a statement issued by the Punjab Health Department citing that the health institute was refusing to admit patients from Punjab, despite being referred to it through proper channel.

Capt Amarinder Singh stated that he would take up the matter with the Prime Minister at a video conference and would request him to direct the PGI to reserve at least 50 ICU beds for patients referred by the state government.

The institute has clarified that it admitted only severe and critically ill Covid patients in the NHE Covid Block. At present, 50 per cent of the total 166 patients admitted to the PGI, belong to Punjab.

All ICU beds in the Covid Block are full and 50 per cent of these are occupied by patients from Punjab.

On an influx of patients from Punjab, the PGI stated that patients arriving at any of the emergencies of the hospital were attended to and provided medical care irrespective of their domicile.

“In fact, the annual census of the PGI for the year 2020 depicted that it provided tertiary-level medical care to more than five states, with the proportion of Punjab being the highest,” the statement reads.