Akalis will contest 97 seats, three more than when they were in alliance with BJP

The Shiromani Akali Dal (SAD) and the Bahujan Samaj Party (BSP) will jointly contest the 2022 Assembly elections in Punjab. The Akalis will contest 97 seats, three more than when they were in alliance with the BJP. The BSP will fight on 20 seats — eight in Doaba, seven in Malwa and five in Majha. 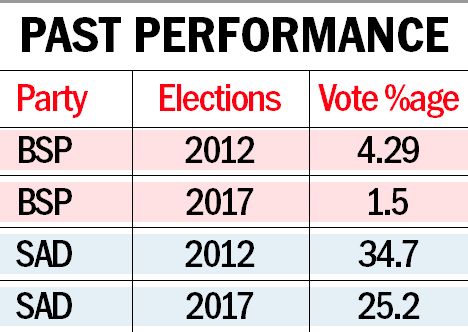 An announcement in this regard was made today by SAD president Sukhbir Badal at a joint press conference with BSP general secretary Satish Chandra Mishra. Both the Akalis and the BSP suffered losses in the previous two elections. While the BSP vote share fell to 1.5% in the last Assembly elections from 4.29% in 2012, the SAD polled 25.2% votes in 2017 as against 34.7% in 2012. The parties had earlier forged an alliance for the 1996 Lok Sabha elections. The Akalis had won eight and the BSP three seats of the total 13 seats.

The SAD, which snapped its ties with the BJP over the contentious farm laws, is counting on the 34 per cent Dalit population for a victory. The BSP, on the other hand, is depending on the Akalis’ strong rural base to win seats.

Akali MPs Naresh Gujral and Balwinder Singh Bhunder are reported to have played a key role in forging the partnership, talks for which were initiated in December last year. Mishra appealed to the disadvantaged sections to back the alliance. Sukhbir said the SAD and BSP espoused the same ideology and “have always worked for the welfare of farmers, the poor and khet mazdoor.” SAD patron Parkash Singh Badal described it as “the beginning of a secular, federal democratic revolution in the state and the country.”