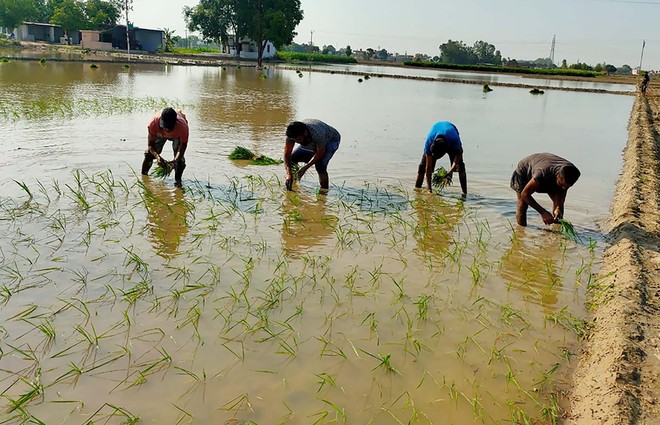 Youth transplant paddy in a field in Nawanshahr. - File photo

Delayed monsoon, water shortage and poor power supply have added to the woes of farmers. Many have even reduced the area under paddy cultivation to avoid crisis.

Sukhdev Singh Atwal (65), a farmer from Charke village in Bhogpur, has sown paddy in just 10 acres this year against 15-20 acres in the past.

The cost of running the generator is Rs 300 per hour. How would I have managed to irrigate all my fields? Reducing the area seemed to be the only option.

He isn’t the only one to do so. The entire district has seen a dip in paddy plantation this year. As per the Agriculture Department, around this time last year, 1.75 lakh hectares were covered under paddy (including 22,000 basmati). However, due to electricity shortage, the area has been reduced to 1,31,800 lakh hectares.

Sukhdev fears if he doesn’t get enough power to operate motor pumps, his crop may get damaged. “Since the beginning of the sowing season, we have been getting electricity for just four hours. It’s just for the past two days that we are receiving uninterrupted supply of six hours,” he said.

Charanjit Singh (80) from Jandusingha has been farming for the past 40 years. He said: “This is for the first time that we are facing shortage of water to this extent.”

Having brought down the paddy cultivation area to 20 acres from 25 acres, he said similar water deficiency was faced around five years ago. “The cost of running generator is also Rs 300 per hour. How would I have managed to irrigate all my fields? Reducing the area seemed to be the only option,” Charanjit said.

Malkiat Singh (50) from Daulatpur village has also reduced the area to 25 acres. Last year, he sowed paddy in 40 acres. “The fields have already developed cracks. I fear that my 5-7 quintals of produce will either get damaged or will be of poor quality. Due to the fungus in the fields, there is high possibility of discolouration of the produce. We don’t even have enough water to irrigate maize and sugarcane,” he rued. Agriculture officer Naresh Gulati said most of the farmers were waiting for monsoon to sow the remaining paddy saplings.