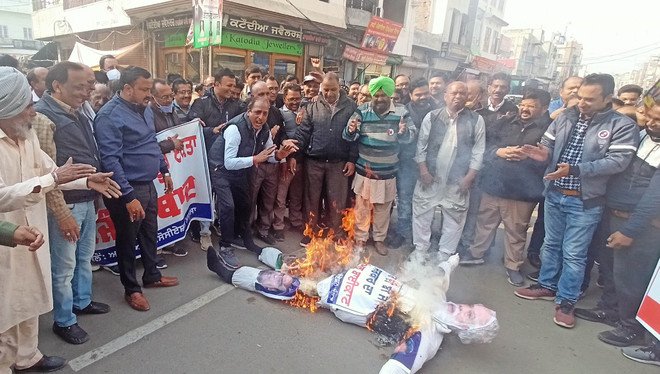 Arhtiyas burn an effigy of Prime Minister Narendra Modi during their strike against I-T raids, in Mansa on Tuesday. Tribune Photo

Alleging that they were being targeted for supporting the farmers’ agitation, arhtiyas across Punjab went on a four-day strike from Tuesday in protest against the recent income tax raids.

Arhtiya Association Bathinda president Satish Kumar Babbu said: “Arhtiyas across the state are supporting farmers in their agitation against the farm laws. We are sending 50 persons every day to protest sites on a rotational basis.”

“To discourage us from lending support to the farmers’ agitation, the Union Government is conducting I-T raids on us. We have gone on a four-day strike across the state from today to protest such repressive actions,” said Babbu, adding “we will keep our shops closed and there will be no purchase”.

Punjab Arhtiyas Association president Vijay Kalra, whose premises were also raided by I-T sleuths, said: “Our working system has been totally transparent since 2013. We have been paying farmers through cheques and now the online payments have also started.”

Condemning the I-T raids on arhtiyas, Sham Lal Dalwa, president of the Arhtiyas’ Association, Budhlada, claimed the new farm laws would not only ‘destroy the farming community’, but also impact those connected with agriculture directly or indirectly.

Arhtiyas had also closed mandis for three days from December 7 to December 9 to participate in the protest at Delhi. In September, the arhtiyas in Mansa had announced the boycott of BJP leaders to protest the farm laws.