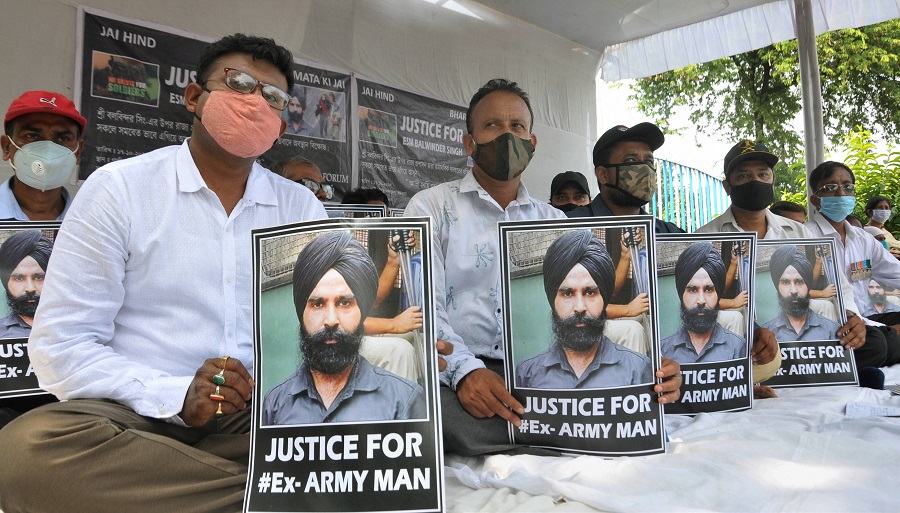 Ex-servicemen and their relatives during a sit-protest near Mahatma Gandhi statue, demanding an immediate release of Balwinder Singh who was arrested in BJPs recent protest rally, in Kolkata on Saturday. PTI

Karamjit Kaur, the wife of   private security officer Balwinder Singh whose turban came off during his arrest last week, on Saturday expressed happiness after meeting West Bengal DGP Virendra and hoped she could take her husband back to Punjab soon.

Kaur, who had threatened to stage a sit-in protest with her son outside state secretariat Nabanna from Saturday to seek Singh's release, thanked the media and the administration in West Bengal for the "positive developments".

"Today I met the DGP. I am positive that Balwinder will be out of jail soon. I wish to take him back to Punjab after his release," she told reporters.

Singh was arrested during the BJP's 'Nabanna March' on October 8 and has been in the custody of the Howrah Police since then.

He is likely to be produced before a court soon and is expected to seek bail, sources said.

Singh has been booked under sections of the Indian Penal Code and the Arms Act for carrying a firearm, the license of which, is valid only in Jammu and Kashmir, police has claimed.

Singh's wife and son Harshveer had come to Kolkata on Tuesday and met Governor Jagdeep Dhankhar at Raj Bhavan seeking his intervention in the issue. Dhankhar had tweeted in her support.

The video of his turban coming off during a scuffle with the police on October 8 went viral on social media.

A section of the netizens claimed the police had pulled off his turban, while the law enforcers maintained it had accidentally come off during the scuffle.

Several Sikh bodies and cricketer Harbhajan Singh have condemned the alleged touching of a Sikh's turban, saying the incident has hurt the community's sentiments. PTI