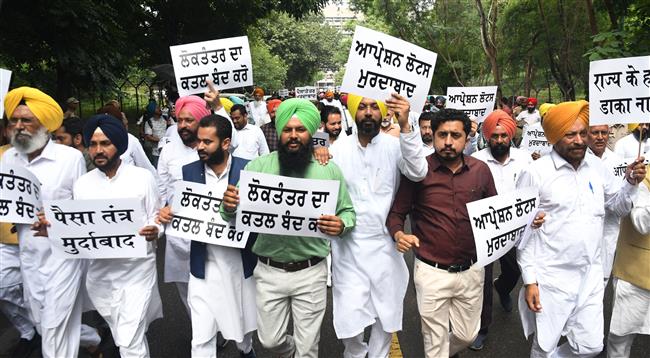 Stopped by the Governor from holding a special sitting of the Assembly to seek a trust vote, Punjab’s AAP government has decided to summon a session on September 27 and to approach the Supreme Court over the Raj Bhavan move. The brouhaha notwithstanding, the current political situation in Punjab did not necessitate any show of strength by the AAP government.

The session, it seems, was yet another attempt by AAP to project itself as a plausible alternative to the BJP, particularly in view of the forthcoming Assembly polls in Gujarat and Himachal Pradesh. With a massive mandate in the elections held a little over six months ago and with no signs of revolt, Governor Banwarilal Purohit chose to withdraw his assent to the session. It was pointed out that House rules did not allow convening of a special session “only to move a trust vote in favour of the state government”.

It is clear the AAP government in Punjab attempted a Delhi repeat. The Delhi Government with 62 of the total 70 MLAs held a trust vote earlier this month. The party is campaigning hard in HP and Gujarat with Punjab CM Bhagwant Mann as the poster boy, sharing dais with AAP convener Arvind Kejriwal. The AAP strategy clearly is to steal the limelight. And the special House session row has done just that. A senior AAP functionary admitted: “Yes, we are making a noise as we want to be heard at the national level. The special House sitting in Delhi had a huge impact, which unnerved the BJP. Not allowing a special session in Punjab will not silence us.” The government has a plan to summon a session on September 27. Critics point out that it will not be smooth sailing. The Opposition is set to question the CM on he being “de-boarded” from a flight at Frankfurt. It will demand that a House panel be formed for a probe.