Ukraine: At Sumy, students melt snow for drinking water; no info on evacuation yet : The Tribune India

Ukraine: At Sumy, students melt snow for drinking water; no info on evacuation yet 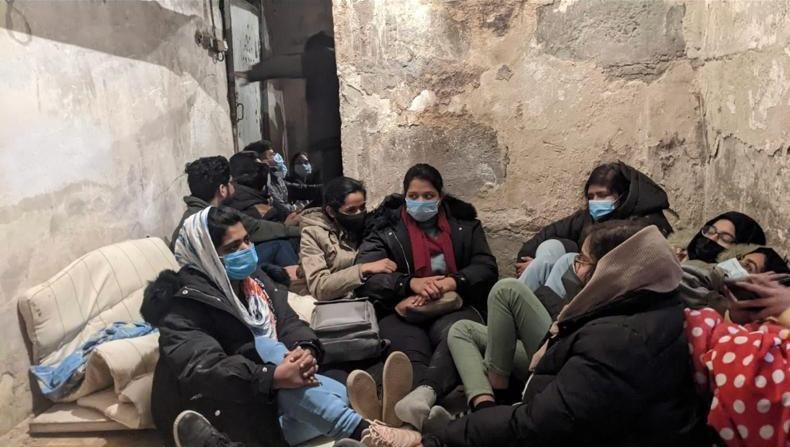 Around 700 students are braving cold conditions in bunkers at Sumy.

As a chilly wind blows amid the sound of explosions at a distance, a bunch of students collect snow in polythene bags to later melt it to satiate their thirst. This is now a daily routine.

Students are trying their best to keep themsleves warm with paper, cardboards and tarpualin in bunkers. Food is somehow managed, but they have to step out every day to collect water. Navrose Singh, Kapurthala resident

At their ramshackle bunker, where they have been putting up ever since the war started, cardboards, tarpaulin, polythene, discarded wood boards and paper have been laid down on muddy floors to lend some warmth. In sub-zero temprature and intense shelling, this is how 700 Indian students spend their pensive and desperate day in dusty, unkempt bunkers.

On the 11th day of the war, while majority of students from Pesochin have been evacuated, there is still no good news for over 700 Indians who make do with bare minimum amenities at Sumy. Though the Indian Embassy has raised repeated concerns about the students stuck in Sumy, the ground help is yet to reach.

“Across Sumy, 650 to 700 students are holed up in several bunkers. Due to the heavy shelling or advisories, all attempts to head out have failed,” said parents. Consultants, who came to the aid of students stuck at Pesochin, are now said to be making attempts to organise their rescue.

Navrose Singh, brother of Kapurthala-based Muskan Thind, said: “Their bunker is shoddy and unkempt. The bricks peak out and the floors are dust-ridden. Students are trying their best to keep themsleves warm with paper, cardboards and tarpualin. Food is somehow managed, but they have to step out amid shelling to collect water every day. All means of road and rail transports around them are destroyed. Students planning to walk out were asked to stay put by the embassy, as it was risky. Many students are getting sick in the cold. We don’t know how they will get out.”

Kuldeep Singh, the father of Kapurthala-based Gurleen Kaur said, “For the past four days, it is still the same. No help has reached the students today either. We are just waiting and praying for the safety of our daughter. These are the only students left. They should be brought out soon.”