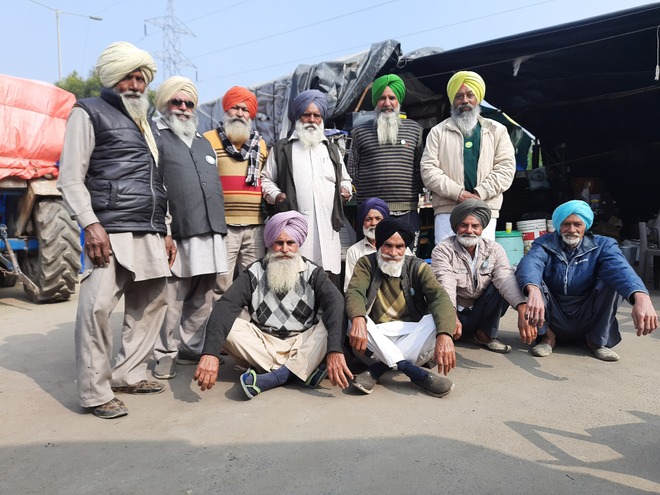 A group of elderly farmers during the protest at the Tikri border. Tribune photo

Amid reports of biting cold and harsh conditions making things tougher and affecting the health of the elderly farmers protesting at the Delhi borders, there are many who have proved that age is just a number.

“It is cold here, but not as much as it is in our fields where we stay at night to irrigate fields around this time of the year. I have no problem in staying here,” said Mahinder Sandhu, 70, from Ealwal village. He has been at the protest site since November 27 and has not visited his house even once.

Another 70-year-old protester Karnail Singh said some politicians were spreading misinformation about cold affecting the elderly. “Even youngsters have died here recently. Age has no connection with deaths. I, along with my three other friends who are above 60 years old, have been sitting here since the protest began but we haven’t faced any health issues so far,” he said.

A visit to the 7-km area on the Tikri border reveals that the elderly farmers were determined to die at the protest site than go back without getting the central agriculture laws repealed.

“The elderly at the Delhi borders have helped us maintain discipline. You would not see even a single youngster indulging in indiscipline. This has helped channelise the youth energy in the right direction,” said Dev Singh, 70.

“We are illiterate, but still understand that the laws are against us. But why the well-educated central leaders are not able to understand this,” said Balwinder Singh, another elderly protester.

Keeping themselves busy in preparing food and cleaning tractor-trailers, they said they did face problems. “It’s not a picnic for us. We face lot of problems but we have no choice. The Centre has compelled us to stay here,” said Jagmale Singh, another septuagenarian.

Gursharn Kaur, 68, from Bathinda said her daughter and daughter-in-law were taking care of the house and fields with her son, while she along with her husband had been sitting at the protest site since December 3.