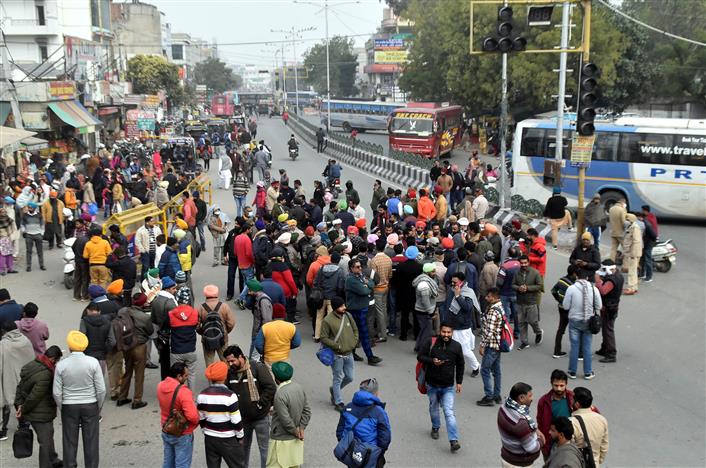 Employees of the Punjab Roadways and Punbus block a road in Bathinda on Friday. Pawan Sharma

Punjab Roadways and Punbus employees today blocked the entry and exit points of the city bus stand and other roads in Bathinda district alleging that old timetable was being followed (for plying buses) after the model code of conduct came into effect, thus causing losses to them on a daily basis.

The protesters parked buses on the roads, which led to a traffic jam and affected vehicular movement for two hours. Commuters could be seen taking alternative routes to reach their respective destinations. Owing to the blockade, ambulances and vehicles of the Army also got stuck in the jam. The Bathinda-Mansa road remained dotted with vehicles for hours.

The union members alleged collusion between the transport officials and private operators citing that the changes in timetable were made despite code of conduct to favour the latter.

Harjit Singh, a union leader, said, “Transport Minister Amrinder Singh Raja Warring had introduced a rational timetable and challenged the monopoly of a few private transporters, but the old timetable has been revived again during the poll code. Now, PRTC is suffering massive loss in Bathinda depot.”

“We met the Deputy Commissioner on Thursday. As we did not got satisfactory response, we resorted to total shutdown today,” added Harjit. The proteters said if new timetable was not followed, they would resort to complete “chakka jam”. After the Deputy Commissioner assured that new timetable would be followed again, protesters called of their stir.