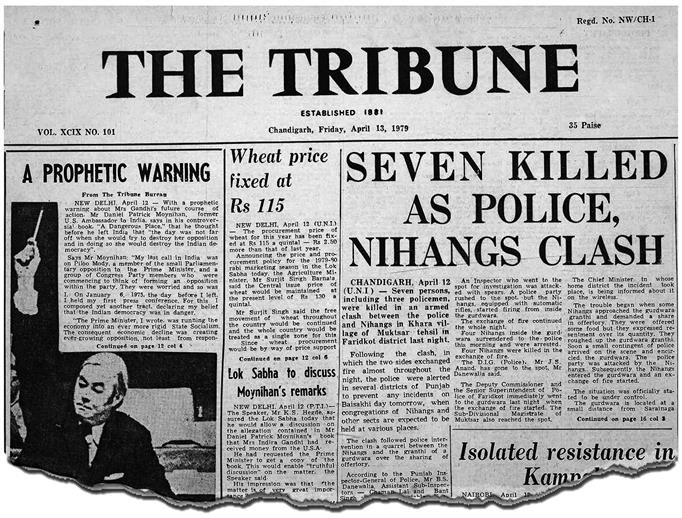 Sangrur MP Simranjit Singh Mann’s loaded statement of calling Shaheed Bhagat Singh a “terrorist” continues to haunt him, as answers are being sought from the hardline leader regarding a firing incident at the historic Sarai Naga Sahib gurdwara, where he allegedly killed Nihangs in a fake encounter on April 11, 1979, when he was posted as the Faridkot SSP. 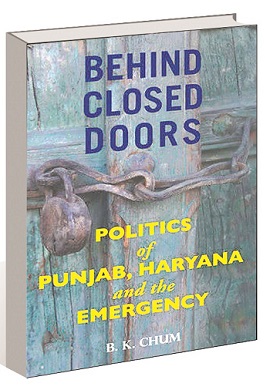 In his memoir, “Behind Closed Doors: Politics of Punjab, Haryana and the Emergency”, Chandigarh-based veteran journalist BK Chum mentions the firing incident that happened “five years before Mann’s transformation into a separatist fundamentalist”. Excerpts...

“I had the opportunity of covering the ‘encounter’, which relates to early April 1979. In Sarai Naga, I found the streets deserted. I was told that Simranjit Singh Mann was talking to journalists at the residence of Harcharan Singh Brar. When I went there, I found two of my Chandigarh colleagues being briefed by Mann about the ‘encounter’ with the Nihang Sikhs. A couple of persons looking like plainclothes policemen took us to the ‘encounter site’ and showed us the bullet marks on the outer wall of the gurdwara, which were described as the proof of the ‘encounter’.

To obtain more evidence, we went to the village, to which one of the Nihangs shot dead in the police ‘encounter’ belonged. We found that the people were returning home after cremating the Nihang. They told us that the police had, in fact, taken the Nihangs with their hands bound behind their backs to the fields where they were shot dead at a point-blank range.”

Prof Jagmohan Singh, a democratic rights activist and nephew of Bhagat Singh, says Mann owes an explanation to the people of Punjab about the wounded walls of the historic gurdwara, which is the birthplace of Guru Angad Dev.

Simranjit Singh Mann should explain how firing 200 gunshots was not a sacrilege of the sacred gurdwara, which is the birthplace of Guru Angad Dev?

“Mann should explain how firing 200 gunshots was not a sacrilege of the sacred gurdwara, which is the birthplace of Guru Angad Dev?” he says.

Much before Prof Jagmohan, the matter was raised by former IAS officer Gurtej Singh, who was once an associate of Mann. In a write-up, he had recounted the incident around a decade ago.

“On April 9, 1979, eight Nihangs were travelling to Damdama Sahib in Bathinda to celebrate Baisakhi,” he wrote in his article.

Accompanied by a pet monkey, they halted at Sarai Naga village in Faridkot district. A gurdwara was adjoining the house of prominent politician Harcharan Singh Brar (who later became the Punjab CM).

The Nihangs (on April 11, 1979) picked up a quarrel with the caretaker (‘mahant’) of the shrine as his pet dog bit the monkey. “The Nihangs were furious and used the stick to chastise the dog,” Gurtej Singh said in the article.

A year later, I met the SSP… His reply was astounding. ‘I was a general of the army. My men lay martyred before me. I was seething with anger.’ He was unrepentant.

The angry ‘mahant’ complained to Brar’s son, who called the police. The Nihangs took shelter in a nearby field. The police fired at them and armed Nihangs returned the fire. “Eventually, three policemen were killed. The remaining police party asked for reinforcements,” Gurtej Singh wrote. Then SSP Simranjit Singh Mann reached the spot the next morning. The police started firing at the shrine. “Several bullet marks could be seen even several months later. The police threatened to blow up the gurdwara. The Nihangs surrendered after an intervention by some mediators.

A Delhi BJP leader has filed a police complaint against Sangrur MP Simranjit Singh Mann over his alleged remarks equating Shaheed Bhagat Singh with a “terrorist”. BJP’s Delhi Mahila Morcha general secretary Teena Kapoor Sharma, in her complaint, said she was “deeply hurt by Mann’s statement on Bhagat Singh, who sacrificed his life at a young age for the country. The statement is an anti-national act and affects every Indian”. TNS

“Thousands of people gathered and witnessed the surrender. Five Nihangs were separated from the rest. They were blindfolded, tied up with ropes and taken behind the gurdwara in full view of the assembled public. The SSP fired at them with his own service revolver and killed at least two when the District Magistrate literally held his hand and prevented further cold-blooded murder.”

The other two Nihangs were killed by another policeman present there. “Sardar Gurbax Singh Gosal was the District Magistrate and he gave me this information,”said Gurtej Singh.

“A year later, I met the SSP at the Punjab Secretariat and asked him why he had fired at one of the holiest shrines of Sikhism and why he had killed the nihangs after taking them in his custody. His reply was astounding. ‘Main faujan da jarnail si. Mere sahmane mere sipahi shaheed hoe paye san. Meri akhaan vich khoon uttar aaya. (I was a general of the army. My men lay martyred before me. I was seething with anger).’ He was unrepentant even a year after the incident,” said the former IAS officer.

Prof Jagmohan sees a striking similarity between General Reginald Dyer’s act at Jallianwala Bagh and the one at Sarai Naga Sahib.

“After Jallianwala Bagh, Dyer had boasted that for him, the battlefields of Paris and Amritsar were the same. What Mann told Gurtej was exactly in the same spirit. Both Dyer and Mann fired at innocents. How do you explain it?” he asks. The Sangrur MP could not be contacted in spite of repeated attempts.