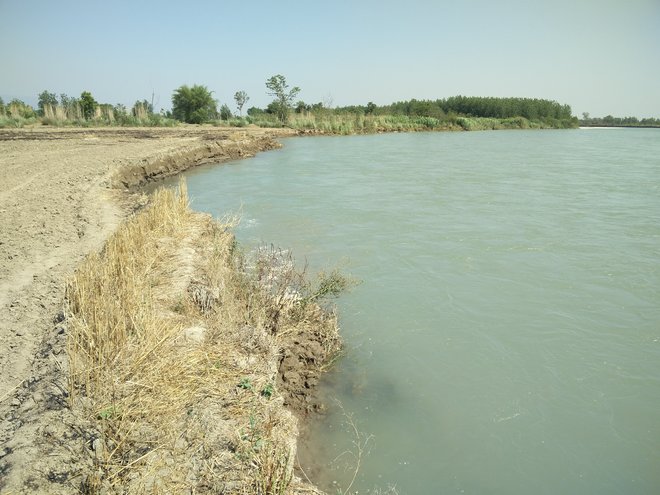 While the authorities failed in repairing and strengthening the banks of the Sutlej since they were damaged during the floods in August, the water being released from the Bhakra Dam has started eroding the land of farmers in the area.

Land owners of affected villages — Lodhipur, Burj, Ballowal, Hariwal, Mehndli Kalan and Chandpur — said they had been left at the mercy of fate again as they had suffered earlier due to lackadaisical attitude of officials concerned.

Heavy rain forced the BBMB to open floodgates that wreaked havoc in Ropar and other districts in August last year. While hundreds of villages in the district remained inundated for weeks, the infrastructure, including crate walls of rivers, spurs and studs, water supply pipelines, buildings of schools and health centres, besides thousands of houses were damaged.

Farmers of Dola Basti, near Lodhipur village, said the crate wall on the banks of the Sutlej towards their fields had been damaged during the floods and it was not repaired till now. In the absence of the crate wall, water released by the BBMB a few days ago had started eroding their land and endangered a nearby bridge.

Former panch of Burj Kamaljit Kaur said her family had lost four acres due to erosion by river water. Few other villagers also suffered losses. It was, however, not the first time when these villages witnessed floods last year. Now, the damage to crate wall during floods last year added to the woes of people.

Ropar Drainage Department XEN Damandeep Singh said due to the pandemic, there was delay in taking steps in this regard. He said he had already earmarked spots where flood protection would start soon.