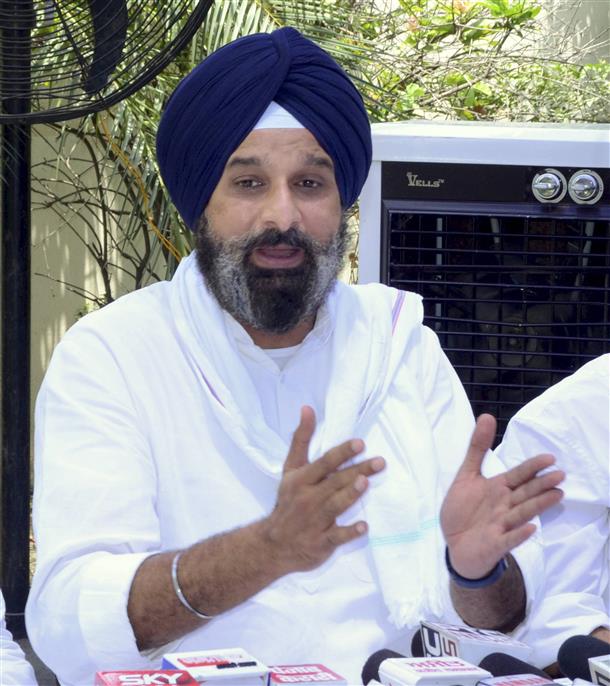 Senior Shiromani Akali Dal (SAD) leader Bikram Singh Majithia on Wednesday appealed to the Election Commission of India to hold the Congress government accountable for violating high court directives and conducting raids on his residence and harassing his family members even before the court passed its final verdict on his anticipatory bail plea.

He also demanded a National Investigation Agency (NIA) inquiry into the audio-tape expose of DGP S Chatttopadhay saying the security breach during Prime Minister Narendra Modi’s visit to Punjab could have even resulted in an assassination bid on the PM.

Majithia, who was addressing the media here, said attempts were being made to prevent him from contesting the assembly elections and this was why the police force was pressed into service to raid his residences even before the high court passed its verdict on his anticipatory bail plea application.

The Akali leader said, “It seems the law is different for me and the same rules are not applied to Congressmen be it Sukhpal Khaira who is accused of drug smuggling or Sidhu Moosewala who is accused to firing an AK -47 or even Lok Insaaf Party (LIP) leader Simarjit Singh Bains against whom non bailable warrants have been issued. No raids have been conducted at either of their houses. Sukhpal Khaira’s residence was not raided even though he failed to get any relief from the high court. The Congress government has not even proceeded against Bhupinder Honey, from whom Rs 10 crore was recovered by the ED, for illegally using the security cover of the chief minister.”

Stating that there were two sets of laws for him and others accused of serious crimes, Majthia said the Congress government was yet to proceed against DGP S Chattopadhyay who was caught on tape addressing a proclaimed offender as his son and even discussing sharing of drug money and fake encounters.

“The proclaimed offender in the Jagdish Bhola drug case even talked about recovering RDX and bombs during the Prime Minister’s visit. Only a NIA probe can get to the bottom of this case as well as the subsequent security breach during the PM’s visit which could have even resulted in an assassination bid on the PM”, Mr Majithia added.

Mr Majithia demanded that all CCTV camera footage of the DGP’s residence as well as his phone and phones of chief minister Charanjit Channi, home minister Sukhjinder Randhawa and Vigilance head Harpreet Sidhu be examined to uncover the entire conspiracy to register a false case against him as well as compromise the PM’s security. He said the NIA inquiry in this context should not be delayed at any cost.

Majithia said his legal team was also considering moving a contempt petition against Congress government functionaries for violating court directions as well as harassing his family members. He said this was done despite the fact that his family members were Covid positive. “I want to ask BOI Director B Chandra Shekhar whether he was under pressure from the DGP or my relative Harpreet Sidhu who has an axe to grind against me.”

Speaking about home minister Sukhjinder Randhawa, Majithia said the former did not have any moral right to speak about ethics in public life. “Randhawa’s father Santokh Singh Randhawa was accused of having links with the ISI agency of Pakistan and had to resign as PCC President and even minister due to this. Everyone also knows how Santokh Randhawa defended and even praised Indira Gandhi for the attack on Sri Darbar Sahib. The minister himself is also known for his various scams including the seed scam as well as patronizing dreaded gangsters like Mukhtiar Ansari and Jaggu Bhagwanpuria.”