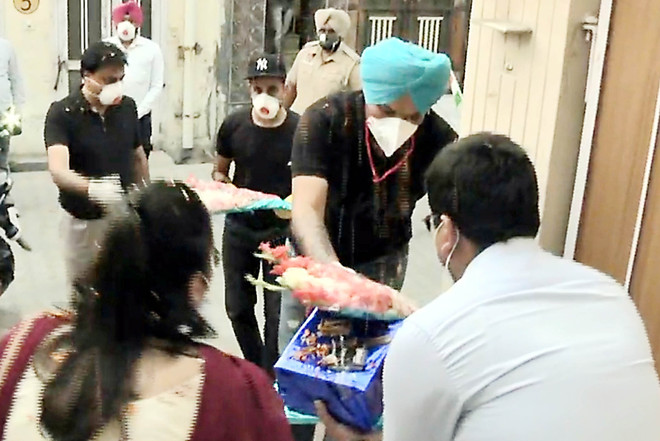 Punjabi singer Sidhu Moosewala presents a bouquet to Dr Sunil Bansal on his birthday in Mansa on Thursday. Tribune photo

Ropar: Researchers at the Indian Institute of Technology, Ropar, have claimed to develop InfraRed Thermography (IRT) with which it can remotely screen Covid-19 suspected patients having symptoms such as fever, tiredness, shortness of breath or a runny nose. Ravibabu Mulaveesala, associate professor, electrical engineering department, said the remote-controlled device could be installed at the entrance gate of crowded places, including railway stations, airports, bus stands, cinema halls and shopping malls. TNS

Chandigarh: Apart from frontline duties of sanitation and collection of garbage, employees of the urban local bodies (ULBs) have assumed a new role of supplying essential items on the doorstep of residents, who are reeling under the impact of Covid-19. To date, the urban local bodies have arranged food for approximately 21 lakh people whereas ration has been distributed among 15 lakh people. They are also making arrangements for fodder in ‘gaushalas’. TNS

Chandigarh: To contain the spread of Covid-19 and enhance surveillance, the Department of Health and Family Welfare has appealed to all private hospitals in the state to refer patients with influenza-like illness and Severe Acute Respiratory Infection (SARI), i.e., fever, cough and difficulty in breathing, to government flu corners or facilities for free RT-PCR testing. An official said the step would ensure that no suspected Covid case was missed out for diagnosis. TNS

Fazilka: The state government has ordered to shut down all petrol pumps falling within 10 km radius of the Rajasthan border from Friday. District Magistrate Arvind Pal Singh Sandhu said people in hordes, particularly farmers, from Rajasthan would come to the state to buy petrol and diesel, as the fuel was cheaper in Punjab. He said the movement of people was augmenting the possibility of spreading Covid in Fazilka, which has so far been a ‘green zone’. OC