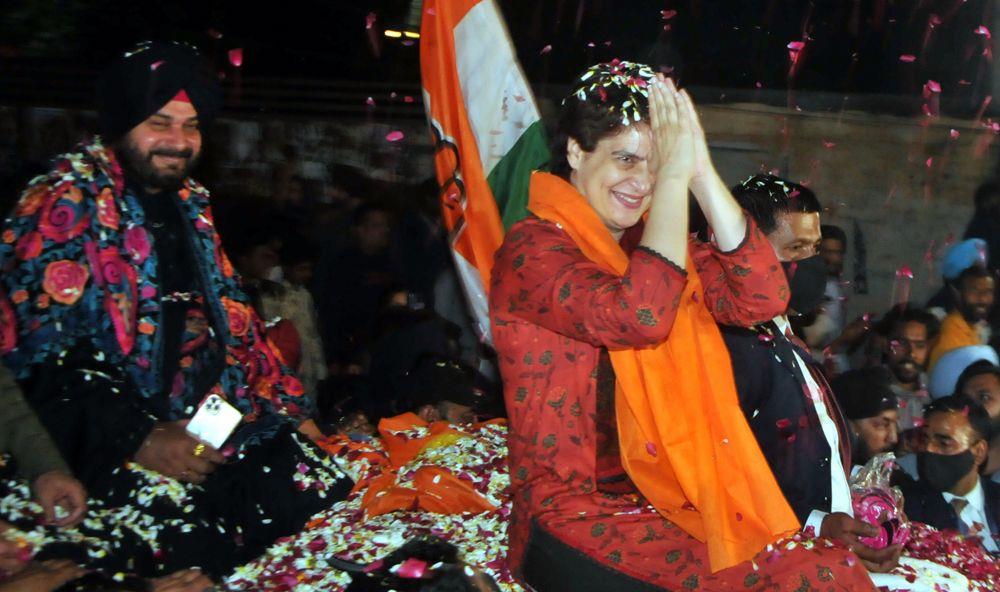 Congress general secretary Priyanka Gandhi Vadra today lashed out at the BJP and AAP, saying both were two sides of the coin and misleading the people of state to garner votes. She was here to campaign in favour of party candidate and Punjab Youth Congress president Barinder Singh Dhillon. Before taking out a roadshow in the town, Dhillon drove Priyanka and CM Charanjit Singh Channi on a tractor to Bela Chowk.

In her address, Priyanka claimed AAP supremo Arvind Kejriwal used to be an RSS member, like PM Narendra Modi, and both were luring people citing the development models of Delhi and Gujarat even as nothing was visible at both places. Priyanka reiterated she was the daughter-in-law of Punjab and that Punjabi blood ran in the veins of her children.

Appreciating CM Channi’s works, she said he had shown grit by taking bold decisions for the development of the state in his 111-day tenure. Without naming anyone, Channi said Punjabis should come together and oppose the “entry of those from UP, Bihar and Delhi who have come to rule in Punjab”.

In Amritsar, Priyanka held a roadshow along with PCC president Navjot Singh Sidhu and Sunil Dutti, the Congress candidates from Amritsar East and North constituencies, respectively.

She was received by Dr Navjot Kaur Sidhu, party supporters and workers. Insiders say the star campaigner’s presence had been necessitated in both constituencies where the stakes are high. Sidhu is pitted against SAD’s Bikram Singh Majithia and Dutti is facing former minister Anil Joshi. Recently, Ludhiana MP Ravneet Singh Bittu had held a series of meetings with local leaders asking them to cooperate in the campaigning of all party candidates or face the music.

Priyanka also visited the PCC president’s residence and spent half an hour there before boarding a flight for New Delhi. —

India will continue to do what is best in interest of own energy security: Modi at G7 Summit in Germany