He was returning to Pathankot after addressing a meeting at Jalandhar 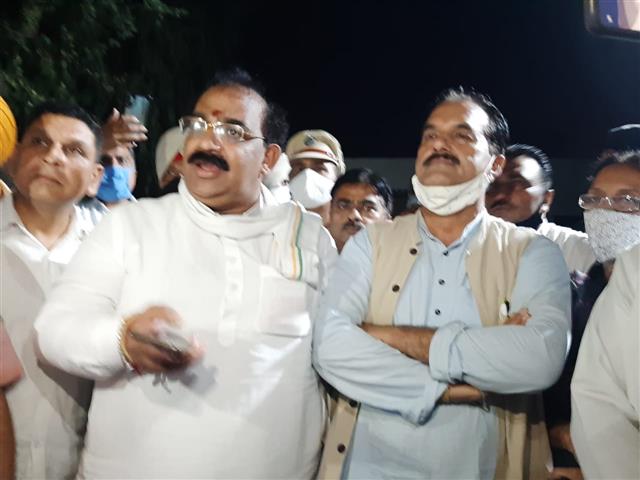 BJP state president Ashwani Sharma was manhandled and his car damaged while he was crossing Cholang toll plaza in Hoshiarpur district on Monday.

He was returning to Pathankot after addressing a meeting at Jalandhar. Subsequently, BJP workers blocked national highway by parking vehicles on road.

Windowpanes of his car were damaged in this incident, though Sharma was safe, they said.

Farmers had laid siege to the toll plaza on October 5, he added.

Ashwani Sharma claimed that baseball bats and stones were used to damage his vehicle and his gunmen took it to safety.

Sharma said attackers were not farmers and alleged that it was a planned attack.

“The attack was only to defame the farmers’ ongoing agitation,” he said.

BJP workers and his supporters staged a dharna and blocked vehicular traffic for about 45 minutes at Dasuya on the Jalandhar-Pathankot GT road, demanding action against the culprits.

Ashwani Sharma lodged a complaint at the Dasuya police station in this connection.

Meanwhile, BJP national general secretary Tarun Chugh condemned the incident and alleged that it was “engineered” by the ruling Congress.

“Those who attacked Ashwani Sharma are goons of the Congress-led government and wanted to give a wrong direction to the farmers’ protest,” said Chugh.

“Farmers do not resort to such attacks and there has been no such incident ever since their protest began,” said Chugh.

He said it was a “security lapse” on part of the Punjab Police.

Meanwhile, Punjab Chief Minister Amarinder Singh too condemned the attack and asserted that there was no question of involvement of any Congressman in it.           Amarinder Singh said he has asked the Punjab DGP to take immediate action in this incident.

“Strongly condemn attack on @BJP4Punjab  chief @AshwaniSBJP  & have asked @DGPPunjabPolice to identify culprits and take immediate action. Won’t let anyone disturb the state’s peace or take law into their hands’,” said Amarinder Singh in a tweet.

“There is no question of @INCPunjab  involvement in attack on @BJP4Punjab chief @AshwaniSBJP  & @BJP4India should refrain from making frivolous & politically motivated allegations. This is highly irresponsible as @PunjabPoliceInd are investigating the case,” he said. — With PTI