Had recently switched to saffron party from Cong, SAD

Leaders who switched over from other parties seem to dominate the first list of candidates released by the BJP today.

The saffron party, which is contesting around 65 seats in alliance with Capt Amarinder Singh-led Punjab Lok Congress and Sukhdev Singh Dhindsa-led SAD (Sanyukt), announced 35 seats today. Around one-third of the candidates on the list had either left the SAD or Congress in the run-up to the elections.

Ferozepur City candidate Rana Gurmit Sodhi, a minister in Capt Amarinder Cabinet, had joined the BJP last month. Similarly, Namisha Mehta, who has been fielded from Garhshankar, was in the race for a Congress ticket and had jumped ship a few days ago. Arvind Khanna, a former Congress MLA who had joined the BJP earlier this month, has been nominated from Sangrur, while Mohan Lal Banga, also a former Congress MLA, has been fielded from the Banga SC seat.

Kanwarveer Singh Tohra, grandson of SGPC ex-chief Gurcharan Singh Tohra, has been fielded from Amloh. Interestingly, while state BJP chief Ashwani Sharma's name did not figure in the first list of 34 candidates, in a late-night development, the party announced his candidature from Pathankot.

The party has taken the decision keeping in mind the winnability of candidates. A large number of young leaders too are in the fray this time. — Ashwani Sharma, state BJP president 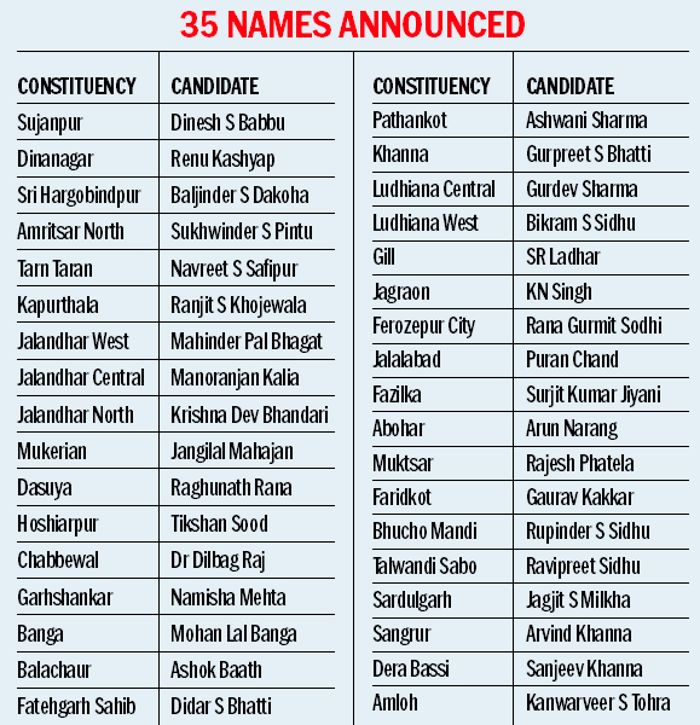