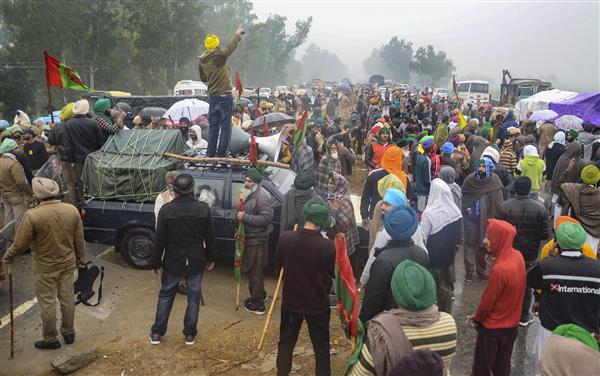 Members of the Bhartiya Kisan Union (Krantikari) were responsible for stalling the cavalcade of Prime Minister Narendra Modi in Piareana village of Ferozepur on Wednesday.

A group of farmers, owing allegiance to BKU-Krantikari, had blocked the elevated road near Piareana village, in protest against Prime Minister’s visit to Punjab today. The blockade was started at 10.30 am, after they were stopped by the police from marching towards the DC office in Ferozepur.

The protesting farmers claim that they did not know that PM Modi was stalled on this route till the news went viral after the PM had left. Carrying green and red flags, they continued to raise slogans against Modi and demanded legal guarantee for MSP, punishment for the perpetrators of Lakhimpur Kheri violence and withdrawal of cases registered against farmers during their struggle.

It may be mentioned that several farmer unions, including BKU Ugrahan, BKU Dakaunda and Kirti Kisan Union, have been protesting across the state against PM Modi’s visit for the past three days. Effigies of the PM were burnt in villages and the farmer unions also stopped buses in different parts of the state, carrying people to the rally site in Ferozepur.

“The protestors, led by BKU-Krantikari and some members of our union, Krantikari Kisan Union, did not believe the local police when they urged them to lift the blockade, saying that PM Modi’s cavalcade was not getting the right of way to reach Ferozepur. The decision to hold protests across Punjab, with maximum concentration in Ferozepur was taken by 10 unions, including BKU Ugrahan, in a joint meeting held at Barnala on December 31,” Dr Darshan Pal, president of Krantikari Kisan Union said.

As the protester realised that they had actually stalled PM Modi’s Ferozepur rally, Baldev Singh Zira, general secretary of BKU (Krantikari) addressed the protesters and claimed that the farmers have taught “arrogant Modi” a lesson. “Usne tuhade raste vich kil paye si, aj tuhadi taakat ne Modi nu bhaja ta ethon (He had place spikes on the borders of Delhi to prevent your march, you have now forced him to retreat),” he told the gathering after the cavalcade of the PM turned away.

It may be mentioned that BKU-Krantikari is believed to be an ultra left farmer union. Though a part of the Samyukt Kisan Morcha, they had recently chosen not to be a part of the Sanyukt Samaj Morcha—the political formation of farmer unions. In 2009, president of the union Surjit Phul was arrested and remained lodged in jail for five months after being booked under different Sections of the UAPA. He was arrested for allegedly having links with Maoist organisations.

Avtar Mehma, press secretary of the Krantikari Kisan Union, said that during the meeting of kisan unions at Barnala on December 31, a decision to hold massive protests during the PM’s visit was taken. “Each organisation was to protest at different sites in a village based on their strength. The BKU-Krantikari was protesting at Piareana village, since they had maximum supporters in this area,” he said.