Bodies of 3 Sikhs killed in Kabul attack to be brought to India on Monday: Harsimrat 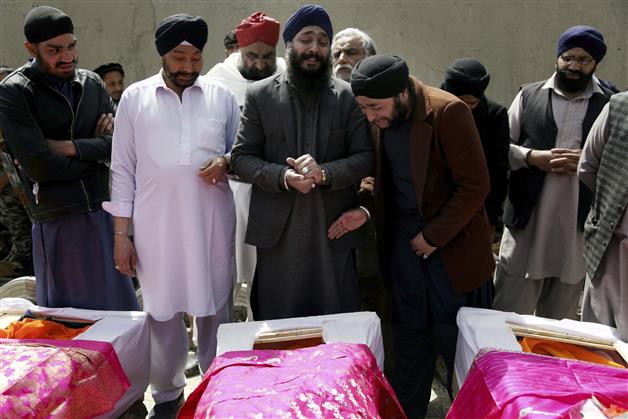 Afghan Sikhs mourn their beloved ones during a funeral procession for those who were killed by a Islamic State te gunman, in Kabul. AP/PTI file

Union food processing minister Harsimrat Kaur Badal on Sunday said bodies of three Sikhs killed in the Kabul gurdwara attack, whose families were based in India, would be brought back to the country on Monday.

She also appealed to Prime Minister Narendra Modi to take steps to facilitate the relocation of all Afghan Sikhs who wanted to leave Afghanistan and settle in India.

In a statement here, Harsimrat said the bodies of three Sikhs were being brought back to India tomorrow. He said while the families of two – Shankar Singh and Jiwan Singh were based in Ludhiana, the third Tian Singh’s family was based in Delhi.

She said while Shankar’s wife would also return with her husband’s body to Ludhiana where his six children were residing with their maternal grandparents, Jiwan’s wife and children were living in Ludhiana.

The Union minister has appealed to the Prime Minister to initiate an exercise to relocate all Afghan Sikhs who wanted to leave Afghanistan due to growing insecurity and threats to their very lives and livelihood. She said from a population of several thousands, only around 300 to 400 Sikh families remained in Afghanistan with thousands migrating to India and elsewhere in the last more than one decade.

She also appealed to the Prime Minister to take up the issue of the safety and security of the Sikh community in Afghanistan with the latter government. “Sikhs in Afghanistan are undergoing a trauma. They are facing threats on a day to day basis. Earlier also there have been gruesome attacks on its members including a terrorist attack in 2018 while killed 13 persons in Jalalabad. Many want to leave Afghanistan and relocate in India. This relocation should be facilitated at the earliest,” he added.