Ramesh Inder Singh has written a tell-all book “Turmoil in Punjab: Before and After Blue Star An Insider’s Story” 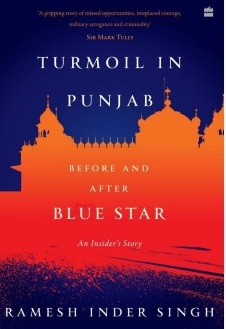 The cover of “Turmoil in Punjab: Before and After Blue Star An Insider’s Story”.

Thirty eight years after ‘Operation Bluestar’, the then Deputy Commissioner of Amritsar, Ramesh Inder Singh, has announced the release of a tell-all book “Turmoil in Punjab: Before and After Blue Star An Insider’s Story”.

The book is set in the politically turbulent period between 1978 and 1994, which was triggered by the rift between Sikhs and Nirankaris, and fuelled by the operations Blue Star, Woodrose and Black Thunder I and II.

Published by Harper Collins, it will be formally released on June 20.

It is narrated as an eyewitness account by Singh, who was originally a 1974-batch West Bengal Cadre IAS officer. He was Deputy Commissioner of Amritsar 1984-1987 and was later Chief Secretary of Punjab.

“I was an eyewitness, and at times a participant, in the defining moments of Punjab’s history, from 1978 to about 1996. What I saw or did—or failed to do—needed to be told. My conscience and the many competing misrepresentation of facts floating around in the public domain, more than anything else, impelled me to write a tell-all account,” says Singh.

The book details the events that ignited the strife and created the socio-political fault lines that divided Punjab in those years. It also describes the terrorist violence in Punjab, the state response to the military operations, the death of thousands of innocent citizens, the assassination of Prime Minister.

It will dwell upon the role played by various political forces, the foreign powers, the media, the diaspora and the way militancy was handled by government agencies, leading to the end of the ethno-national conflict in Punjab. Many previously unanswered questions will be addressed.