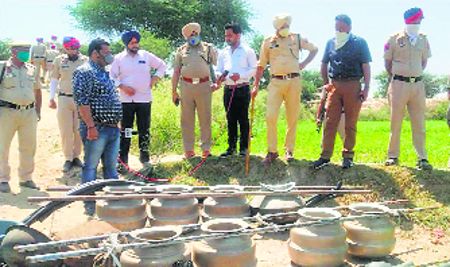 Excise officials and cops after a raid at an illicit liquor unit.

In an unprecedented crackdown on illicit brewing, trade and inter-state smuggling of country-made liquor, over 50 cases have been registered in the past three days alone under “Operation Red Rose”, conducted jointly by the Punjab Police and Excise and Taxation Department, in the border district.

This is in stark contrast to 12 cases registered from March 23 — the day lockdown was imposed — till last week.

As per information, 3.5 lakh litre ‘lahan’ (illicit liquor) has been seized in the past few days. While 1.3 lakh litre liquor was dumped into the Sutlej on Thursday, 3,000 litre distilled liquor was seized the same day. Another 1.51 lakh litre ‘lahan’ was seized and 36 persons arrested. Further, 2,000 bottles of PML (distilled liquor) sold illegally were seized. HPS Ganotra, Divisional Excise and Taxation Officer, said huge recoveries had also been made in Muktsar, Fazilka and Moga. A senior excise official said the government was alarmed at the mounting losses to the state exchequer, following which the operation was planned.