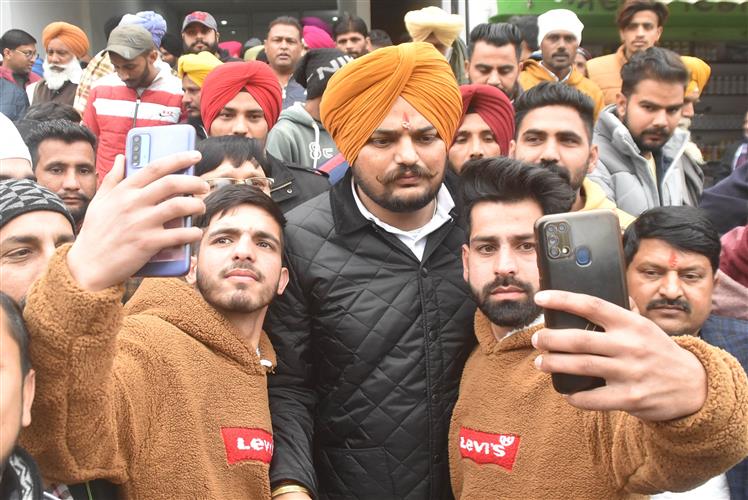 His celebrity status aside, Punjabi singer Sidhu Moosewala, the Congress candidate from Mansa, is banking on his personal connect with voters — seeking the blessings of the elderly, bowing to womenfolk in respect and posing for pictures with youngsters. Often asked to sing a few lines from his hit songs, he readily obliges.

Will ensure jobs for youth

On being elected MLA of the ruling party, I will be able to bring development projects to my constituency and help generate jobs for the youth. Sidhu Moosewala, Mansa candidate

A greenhorn in politics, he is invariably seen in jeans and a black jacket at public meetings. What stands out is the 'tilak' on his forehead. Such symbolism matters in the constituency which is dominated by Hindu voters, mostly from the Bania community.

“I have joined politics not for status or fame. I want to be a part of the system to bring about change. I want to be the voice of the people,” he says. Pitted against Dr Vijay Singla of the Aam Aadmi Party and SAD’s Prem Arora, the singer has launched an exhaustive campaign, including on social media. His digital team regularly uploads pictures of his door-to-door campaign and other events on his Facebook page, “Mansa da Sidhu.”

Appealing for votes, he claims: “The Congress will return to power in the state. On being elected as MLA of the ruling party, I will be able to bring development projects to my constituency and help generate jobs for the youth. I was raised in Mansa, and I want to work for its betterment.”

Taking a dig at AAP, he reminds the people: “After the elections last time, almost half of the AAP legislators joined the Congress. You must make an informed choice." The turnout at his meetings is always impressive.