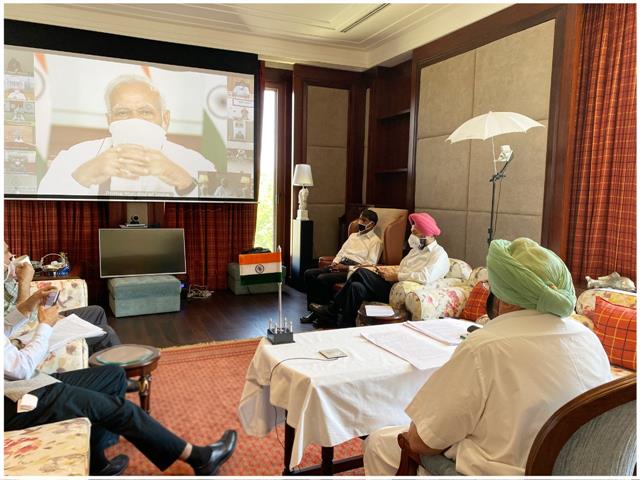 A day after Punjab extended the curfew till May 1, Punjab Chief Minister Captain Amarinder Singh on Saturday recommended extension of the national lockdown by at least a fortnight, while suggesting a slew of health and relief measures to the people in the state’s COVID-19 battle, in addition to special concessions for industry and agriculture sectors on an urgent basis.

Participating in Prime Minister Narendra Modi’s video-conference with all Chief Ministers, Amarinder pointed out that there was huge uncertainty about the likely incidence of disease and the nation was in for a long fight.

Given the trend in China and several European countries, it was necessary to continue the lockdown, he said, adding that though the restrictions were causing hardships to the people, India could not afford to take any chances. The people of Punjab have a high morale, and will continue to support government efforts to combat the pandemic, he added.

Amarinder informed the meeting that the state government had already decided to go in for curfew/complete lockdown till May 1.

Pointing to the excellent work being done by people in the current crisis, Amarinder sought a Special Risk Insurance for all government employees, including police personnel, sanitation workers and all other employees, who are working day and night to help ameliorate the miseries and stress of common man in these trying times. It was important for the Centre and states to keep the morale of people and frontline workers (Health staff, police, sanitation workers, etc) high, he said.

Underlining the need to substantially increase the number of tests being done and go in for rapid testing, at least in the state’s hotspot areas of Nawanshahr, Dera Bassi and Mohali, the Chief Minister said the Central Government should hasten supplies of required testing kits.

He also asked for early permission for testing in DMC and CMC Ludhiana, as already requested to the Union Health Minister.

The Chief Minister further requested Rs 500 crore for quick upgradation of infrastructure of government hospitals in Punjab, which is currently at stage 2 of the pandemic and has a large NRI population. He also called for speedy approval, on priority basis, by the Centre to the state’s proposal for Rs 550 crore project to set up an Advanced Centre for Virology in Punjab.

On the relief measures needed urgently in the light of the current crisis, the Chief Minister urged the Centre to defer recovery, and waiver of interest and penalties, on industrial loans for six months. Emphasising that the industrial establishments could not continue to look after their workers, and even pay their salaries for the period of lockdown, for a long time, he asked the Centre to think of some innovative solutions for Relief to Daily Wage Workers and Industrial Labour either through ESIC funds or under MNREGA. The CENTRE may allow village Panchayats and Municipalities to utilise the 14th Finance Commission Grants for emergency relief including food and medicines for the poor and needy, he suggested.

Amarinder also asked for a one-time increase in borrowing limit from 3 per cent to 4 per cent of state's GDP by amending the Fiscal Responsibility and Budget Amendment Act. His government, said Amarinder, was sending a complete proposal in this regard as desired by the Union Ministry of Finance.

Referring to the massive harvesting and procurement operations set to begin in Punjab next week, the Chief Minister reiterated his demand for bonus to farmers to incentivize staggered/ delayed procurement of wheat. He also called for quicker movement of food grains lying in FCI godowns in Punjab, along with waiver of three months' interest on crop loans and deferment of recovery of crops loans by commercial banks.

Thanking the Centre for releasing substantial funds since the last meeting, Amarinder stressed the need for early release of pending arrears of GST on priority to help the state.

Amarinder shared with the Prime Minister the latest update on the situation in Punjab, and the state’s preparedness to deal with the spread of the pandemic. Punjab has seen 151 positive cases and 11 deaths so far, with 17 of the 22 districts affected and 15 having more than three cases each. Mohali has the maximum of 48 positive cases.

The total number of samples tested is 3,461, of which 338 results are awaited and 2,971 have been found negative. There is no patient on ventilator, as of now, while 18 people have recovered from the disease.

On the preparedness of the state, he said a total of 52 isolation hospitals had been set up so far and the state had developed a 3-phase model to handle the pandemic. The model proposes 2,558 beds in 20 independent COVID Isolation facilities in the first phase. For Phase 2, the state has identified 1600 beds, along with manpower, along with 1,000 additional beds in government facilities. These will be operationalized when 50% of Phase One occupancy is achieved.

Phase 3 would entail creation of 20,000-bed facility in COVID Care & Isolation Centres, along with Temporary Hospitals for non-critical COVID care. Should the need arise, this will be scaled up to 1 lakh beds as CCICs in Phase 4.

In terms of logistics, there are currently 76 ventilators in government hospitals and 358 in private, with 8 of another 93 ordered received so far.