Cars, scooters used to transport grains from mandis to godowns in Punjab : The Tribune India 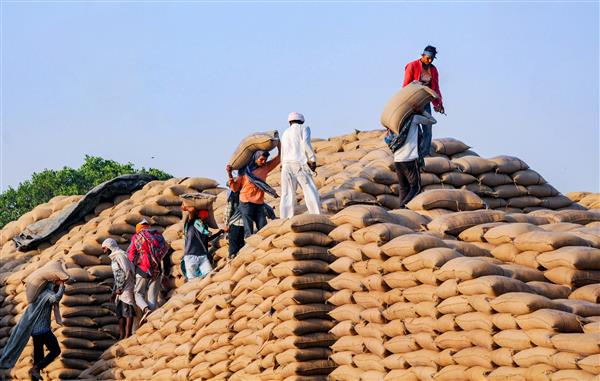 Can hundreds of tonnes of foodgrains be transferred from mandis to godowns on cars, scooters or motorcycles? In Punjab, it seems this is possible, at least in government records.

It is this discrepancy in the records of the Food and Supplies Department, submitted by the contractor hired by the department during the previous Congress regime in 2020-21, which has helped the Punjab Vigilance Bureau unravel the scam.

The contractor, Telu Ram, was sent on a three-day remand by the court today after he was arrested yesterday. His interrogation is expected to reveal how the scam unfolded and the expanse of the scam.

“The registration of a case by the Vigilance Bureau against contractor firm hired by the Food and Supplies Department for the transportation of foodgrains from mandis to storage houses, its cartage and labour, seems to be just the tip of the iceberg. We have received complaints of similar discrepancies in allotment of contracts by the department in 2020-21 from 18 districts in the state. All these complaints are now under investigation,” a senior officer in the Vigilance Bureau told The Tribune.

The FIR registered by the bureau mentions that the complaint for the allotment of tenders for labour, cartage and transportation of foodgrains from Ludhiana district was received against the proprietors of Gurdas Ram and Company, the firm that was allotted contracts, at least three officers of the Food and Supply Department and Punjab Warehousing Corporation and former Food and Supplies Minister Bharat Bhushan Ashu.

The FIR, however, has not been registered against the former minister, but against the proprietors of firm and officers. Officials in the Vigilance Bureau say, “Investigation in the case has revealed that the policy for the allotment of tenders for labour, cartage and transportation of foodgrains was passed by the then Cabinet.”

“The capacity of each cluster should have been fixed according to wheat arrivals of the previous year. But in order to favour certain individuals, the capacity of each cluster was fixed on the basis of wheat or paddy arrivals for the previous year, whichever was higher. This was restrictive and debarred many people from participating in the tendering process as tender rates went up substantially with increase in capacity. Many tenders were also rejected on frivolous grounds,” reads the FIR in the case.

The scam in case of Ludhiana was unravelled after the registration numbers of vehicles used by the contractor for the transportation of foodgrains was verified by the Vigilance sleuths with the Transport Department upon receiving a complaint earlier this year.

Some vehicles used turned out to be cars, scooters and motorcycles, rather than trucks and tractor-trailers.

“It is strange that the committee of officers constituted to pass the tender missed verification of vehicles. Even at mandis, where a gate pass for each vehicle leaving with foodgrains is issued, inspectors did not point out the discrepancy. As a result, one deputy director, district food and supply controllers and district managers of food procurement agencies posted in Ludhiana district have been booked. We are anticipating a similar pattern in other 17 districts too, for which investigation is on,” a senior officer in the Food and Supplies Department told The Tribune.