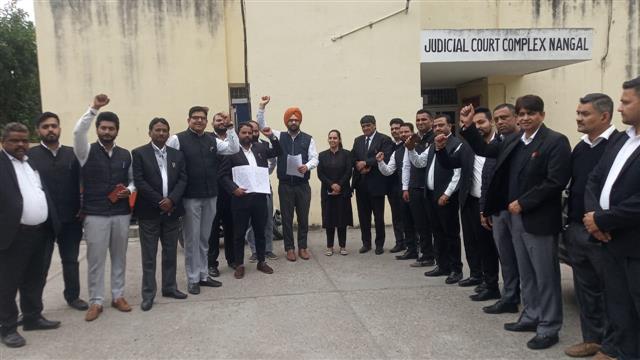 Lawyers hold a protest in Nangal on Monday. Tribune photo

Protesting against the registration of a case registered against Vishal Saini, a member of Ilaqa Sangharsh Committee, advocates of Ropar, Nangal and Anandpur Sahib went on strike today. They claimed that Saini had been implicated in a false case because he had raised voice against the state government.

Addressing a press conference today, Nangal Bar Association president Navdeep Singh Heera alleged that Saini had been implicated in a false case as he was vocal against illegal mining and raising the issues of common man.

Meanwhile, mining contractor Rakesh Kumar Chaudhary, who was arrested on Friday allegedly for illegal mining, was produced in a Nangal court today from where he was sent to judicial custody.

Nangal SHO Danish Veer Singh said one of the accused Surinder Singh had already been arrested.

Meanwhile, Ilaqa Sangharsh Committee members today alleged that the case against its six members had been filed at the behest of mining mafia.

The committee appealed to the Chief Minister to get an inquiry conducted by a sitting judge of Punjab and Haryana High Court or hand over the case to CBI.