6 crossings in Pathankot no longer a traffic bottleneck 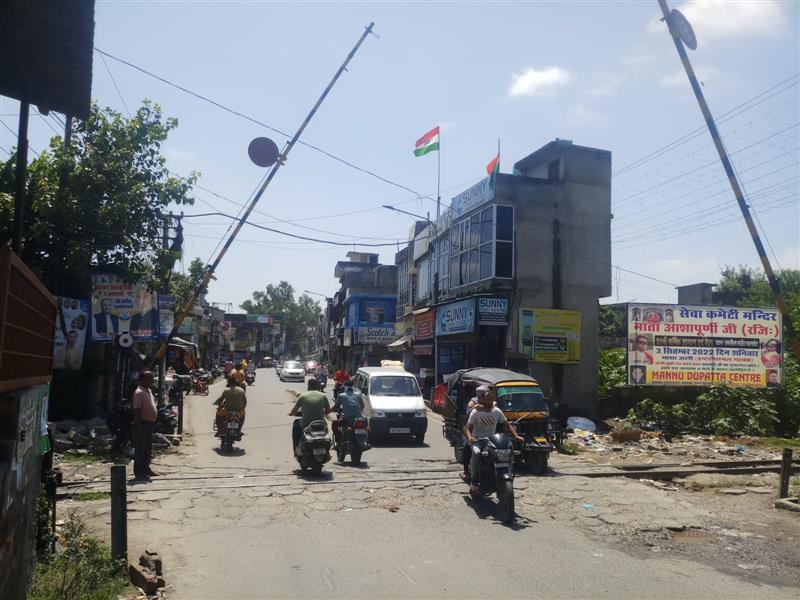 A railway crossing on the narrow gauge track running through the municipal limits of Pathankot city. Tribune photo

The collapse of the 800-metre-long archaic railway bridge over Chakki rivulet is proving to be a blessing in disguise for city residents.

The reason is that the six railway crossings falling on the 3.6-km stretch of narrow gauge track falling in the Municipal Corporation (MC) limits will no longer shut down consequently solving the decades old traffic problem in one stroke.

These crossings used to close a mind-boggling 18 times a day leading to severe traffic congestion. Schools, businesses and hospitals were all hit as the city got divided into two parts for long periods of time. So much so, real estate dealers claim that land and property prices have been stagnant for the last several decades.

On July 31, the Railways had declared the structure as “unsafe”. Following this rail traffic was stopped. “Not even a single case of vehicular congestion has surfaced in the last 20 days,” said Mayor Panna Lal Bhatia.

So severe was the problem that locals have petitioned every MP since film star Vinod Khanna was elected for the first time in 1998. “Actually, Khanna was elected at a time when car manufacturing picked up in the country. The roads started to clog while nobody cared to look into the rail crossing riddle,” said Anil Vasudeva, who remained actively involved with the MP in trying to find a resolution.

Former MPs Partap Singh Bajwa and Sunil Jakhar had taken up the issue repeatedly with the Railways. Jakhar actually came close to unlocking the dilemma but his interest waned after he lost the 2019 election.

Incumbent MP Sunny Deol, too, tried but like his predecessors, he also ran up against a wall. The contentious subject used to come in handy for politicians whenever parliamentary elections were held. ‘The rail impasse’, as locals would call it, took precedence over all other issues in speeches.

The Railways cited “technical reasons” while recently shooting down a suggestion of elevating the entire track. Railway sources say it will be a long time before the structure is repaired or a new one comes up.