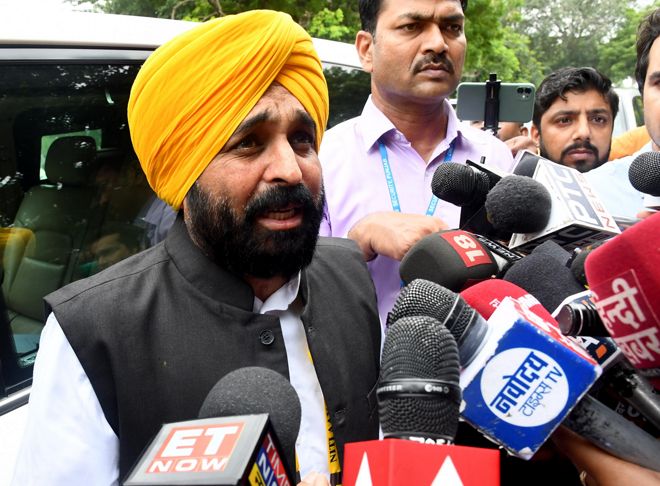 Chief Minister Bhagwant Mann today said he had demanded reconstitution of the committee on MSP and to help the state’s efforts in crop diversification in his presentation at the seventh Governing Council meeting of NITI Aayog here, which was chaired by Prime Minister Narendra Modi.

Lamenting that his predecessors skipped the meeting on three occasions, the Chief Minister said he had come with his ‘home work’ done and he was happy with the meeting, as it would bear results for the state.

Talking to reporters after the meeting, Mann said: “Today was NITI Aayog’s 7th meeting and it was the first for me after becoming the Chief Minister. It is unfortunate that no one came from Punjab in the last three years. I went with detailed homework today and raised Punjab’s issues. The biggest issue was of crop diversification.” He went on to add that he was satisfied as all issues were listened to.

“We are caught up in the wheat-rice cycle. Our water levels have decreased to a dangerous level. We demand MSP for farmers and reconstitution of the committee on MSP, as there are no stakeholders in it.”

During his presentation, Mann also suggested holding the G20 meeting in Amritsar. “All Chief Ministers raised their issues. Prime Minister sat with us from 10 am to around 4.15 pm and noted all points. We gave suggestions. India will be chairing G20 meet in December. I have put forth Amritsar’s name before External Affairs Minister S Jaishankar as the location where all meetings can be held. We will showcase our culture at the summit,” he said.

India will hold the G20 presidency from December 1, 2022, and will convene the G20 leaders’ summit next year for the first time.