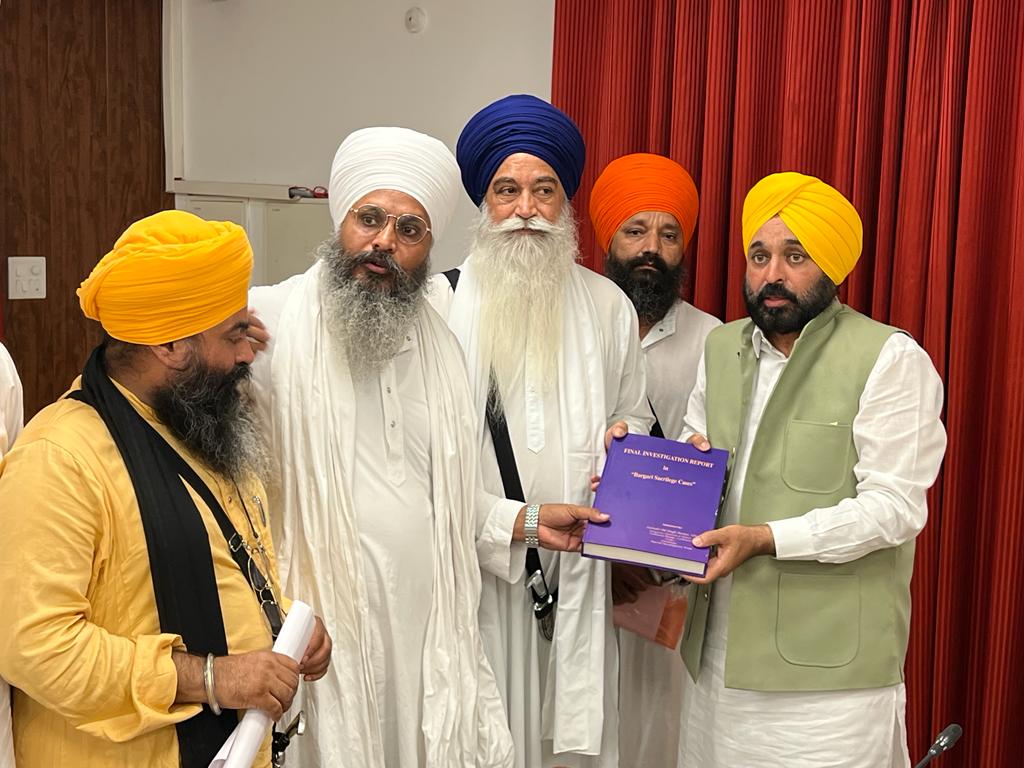 CM Bhagwant Mann hands over the report to the Sikh leaders in Chandigarh on Saturday.

It has named Dera head Gurmeet Ram Rahim Singh as the conspirator besides naming several followers, including the three who have been absconding.

The report was made public on Saturday when Chief Minister Bhagwant Mann handed over its copies to some Sikh leaders who have been pursuing the case. The Sikh delegation comprised Major Singh Pandori, Chamkaur Singh, Bhai Rupa, Resham Singh Khukhrana and Baldev Singh Joggewala. This is the first time that a report has been made public in this manner.

Inspector-General Border Range SPS Parmar headed the five-member SIT constituted on April 4 last year on the directions of the Punjab and Haryana High Court. The SIT had submitted the final report to DGP VK Bhawra and DGP Intelligence Prabodh Kumar on April 21 this year for approval.

The 467-page report counters several claims made by the Central Bureau of Investigation (CBI) in its investigation. The CBI had found no evidence of the Dera Sacha Sauda’s involvement and had filed a closure report. The investigation report was also submitted in a challan before a Faridkot court earlier.

Three other dera followers -- Harsh Dhuri, Pardeep Kler and Sandeep Bareta -- were involved in the conspiracy and are yet to be arrested. They have been declared proclaimed offenders.

The investigation report said there was a direct link with the Dera Sacha Sauda, Sirsa, and the accused, who are followers of the Dera. “It is evident from material/evidence collected by the SIT of Punjab Police that the accused had direct nexus with the management of the Dera.

It said prime accused Mohinder Pal alias Bittu (later killed in Nabha jail by inmates) and his companions were upset due to the non-release of the film ‘MSG-2’, following which Bittu organised a three-day dharna at Moga.

The accused were agitated at the non-release of the film and hatched the conspiracy to take revenge. Accused Nishan Singh and Baljit Singh stole the holy book and later the accused used two cars and a motorcycle to steal the holy book, paste posters and strew the pages around.