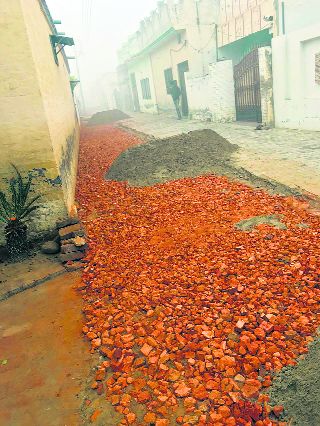 The work on a street outside the house of deceased Air Vice Marshal Gurdial Singh Punia (retd) underway in Gurdaspura village.

Days after The Tribune highlighted the alleged discrimination faced by the family of deceased Air Vice Marshal Gurdial Singh Punia AVSM (retd) from the Panchayat Department, the Chief Minister’s Office pulled up senior officials and got started the construction work at the street, which had been left incomplete for the past more than a year in Gurdaspura village.

Punia, his father Subdedar Dhanna Singh and son Col Inderpal Singh Punia (retd) have served in the armed forces for almost a century. Last year, the Panchayat Department laid interlocking tiles only in half of the street and left the remaining muddy portion in front of the house of Punia incomplete.

“Work has started after more than one year as earlier, the Panchayat Department did not take any action. We are thankful to the office of the Punjab CM for getting the work started,” said Jaspal Singh Sekhon, a resident of the area.

Sangrur Deputy Commissioner Ramvir said after getting calls from the CMO, he had directed the department to complete the work at the earliest. “It was not in my knowledge, otherwise I would have got it done earlier,” the DC said.