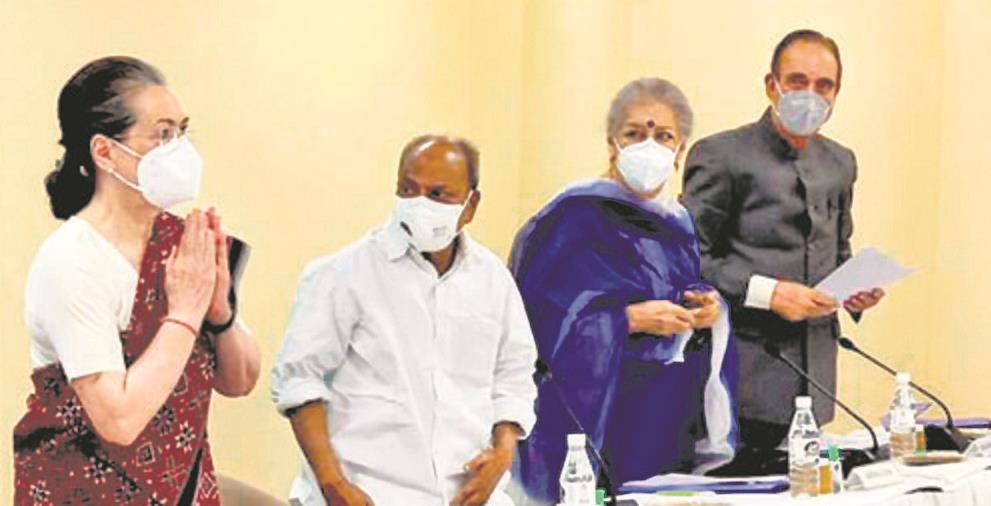 Sonia Gandhi will continue as interim chief until the Congress elects its new president by September 20 next in line with the internal election schedule the party’s working committee approved at a four-hour meeting held on Saturday. The Congress Working Committee (CWC) unanimously urged Sonia to continue till then, reposing faith in her leadership and dismissing recent voices of distrust emanating from the G-23. Two senior G-23 members, Ghulam Nabi Azad and Anand Sharma, attended the meeting.

The CWC called Lakhimpur Kheri a diabolic attack on farmers, slamming the Centre for not sacking MoS (Home) Ajay Mishra whose son was accused of murder in the case.

The CWC sought restoration of full statehood to J&K along with polls and adopted resolutions against inflation, farm distress.

Importantly, Rajasthan Chief Minister Ashok Gehlot even proposed for Rahul Gandhi to assume the Congress mantle, a suggestion the former party president said “he would consider”. The meeting, the party later said, progressed in a positive atmosphere with no “thunder or storm”.

For some time during the CWC meeting, mood became sombre when Rahul Gandhi told the members Charanjit Singh Channi broke into tears when told he would be the Punjab CM. Present at the event, Channi said, “I could have never dreamt of being a CM as I am from a community where we are conditioned not to have any dreams.” Rahul, citing Channi’s example, said people expected the Congress to fight for them.

The CWC also took note of the recent government notification extending the BSF jurisdiction from 15 to 50 km in states, including Punjab. It said the party would work with all stakeholders to press the government for repeal of the notification, which it termed a dangerous precedent and encroachment on state powers.

The tone for deliberations was set this morning when Sonia, in a stern message to the G-23 leaders who had recently questioned her decision-making citing the absence of a full-time elected chief, said, “I am, if you will allow me to say so, a full-time and hands-on Congress president.” She also reminded the leaders that they need not speak to her through the media.

“I have always appreciated frankness,” said the 74-year-old whom the CWC thanked for her guidance despite frail health.

Without naming anyone, the Congress chief, in veiled response to the G-23’s routine refrain of the need to revive the Congress, said, “The entire organisation wants a revival of the Congress. But this requires unity and keeping the party’s interests paramount. Above all, it requires self-control and discipline. Undoubtedly, we face many challenges but if we are united, if we are disciplined and if we focus on the party’s interests alone, I am confident we will do well.”

The Congress Working Committee, which was briefed on the party’s preparedness for the upcoming five state polls, later approved the organisational election schedule with the membership drive slated between November 1 this year and March 31 next.

Elections for block committees and one member each of the Pradesh Congress Committee will be held from April 16 to May 31, 2022; district committee chiefs and executive will be elected between June 1 and July 20; PCC chiefs and AICC members between July 21 and August 20 and AICC president between August 21 and September 20, 2022.

“After the Congress chief, elections for the CWC and other bodies will be held at the plenary expected preferably in September or October 2022,” said AICC general secretary (organisation) KC Venugopal. The CWC passed three resolutions—a political resolution attacking the government for “deteriorating internal and external security situation and demanding restoration of full statehood to J&K along with elections”; a resolution against inflation and another on farmers’ distress.

The CWC also condemned Lakhimpur Kheri killings, slamming the Centre for not sacking MoS (Home) Ajay Mishra whose son was accused of murder in the case.