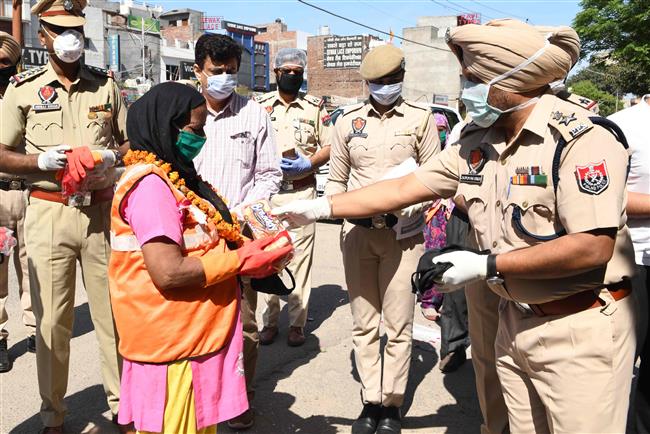 The Punjab government on Saturday announced special health insurance cover of Rs 50 lakh each for the police personnel and sanitation workers in the frontline of the battle against COVID-19, on the lines of that announced for health workers by the Centre.

As an emergency measure to combat COVID-19, the Punjab Cabinet led by Chief Minister Capt Amarinder Singh also authorised the Procurement Committed headed by ACS Vini Mahajan to do quick price discovery for all purchases related to COVID-19 management and containment, and make purchases on urgent basis.

The Cabinet also allowed the Procurement Committee to procure essential and emergent medical items at prevalent market prices as the same had risen substantially due to widespread demands due to COVID Management.

Taking serious note of shutdown of operations by several private hospitals, the Cabinet decided on strict action against such hospitals, with the Chief Minister suggesting that the health department should cancel the licences of hospitals refusing to treat COVID-19 patients.

The Council of Ministers, which met through a video link to review the current situation in the state, decided that the arrangements to manage COVID patients should be scaled up gradually to cater to larger number of patients.

Contingency plan should be prepared with alternative locations, equipment, and officers to deal with any emergent situation whereby any of the existing arrangements fail/collapse, it was decided.

The Health Department earlier informed the Cabinet that once the rapid testing kits and the final guidelines come in from the Government of India, rapid tests will begin in the state to speed up the identification of positive cases.

Contact tracing of the Nizamuddin returnees was being done on an aggressive scale and 192 persons from the list of 255 received by the state had already been tested and isolated, the Health Department said.

The Cabinet was further informed that there were enough PPEs for the health staff. Health Minister Balbir Singh Sandhu said it 1,000 PPEs each were being made available at each Government hospital.

The Chief Minister directed DGP Dinkar Gupta to finalise a comprehensive security plan to ensure smooth procurement of the wheat grain, while directing purchase centres to notify details of procurement arrangements by April 7-8, 2020.

Reviewing the state’s preparedness on this count along with his cabinet colleagues, the Chief Minister stressed that the procurement arrangements should be put in place in a manner that every grain of the farmers is procured though in a staggered manner.

All purchase centers should cater to COVID preventive measures, and also for food, water, shelter and medical requirements for all those required to be in these centers for procurement of wheat.  Details of procurement arrangements should be notified by April 7-8, 2020, the Council of Ministers decided.

To ensure timely payment to the farmers, it has been decided that payments shall be made to the Arhtiyas within 48 hours and they will, in turn, pay the farmers for the produce within the next 48 hours.

To stagger harvesting, combines will be allowed to operate through the day, from 6 a.m and 7 p.m. an official spokesperson said after the Cabinet meeting.

Further, to ensure smooth and speedy operations, maximum number of labourers shall be permitted for unloading operations at storage sites.

Given the need to prevent overcrowding, the state government is working with Arhtiyas and sheller owners to add 3000 purchase centres this year, with coupons to be issued to the farmers and others involved in the process. A total of 1820 purchase centres will be available for procurement.

The Chief Minister warned of strict action, including impounding of passports, of those who fail to declare their travel history.

To further strengthen the state government’s battle against the unprecedented crisis triggered by the global pandemic, Captain Amarinder also authorised extension for all retiring Health Department employees by three months, as proposed by Chief Secretary Karan Avtar Singh. A detailed list will be submitted later to the Chief Minister for approval, according to an official spokesperson.

This was decided as the death toll due to COVID-19 went up to five, with 57 positive cases being reported in Punjab.

The Council of Ministers passed three resolutions thanking various categories of people for their exceptional contribution to the battle against COVID-19. These related to those government employees who had decided to donate a portion of their salaries; all NGOs and religious organizations for playing a pivotal role in persuading people to avoid congregation/gathering, and frontline officers and workers, including police, health staff, sanitation and Anganwadi workers, fighting against the Coronavirus.

Underlining the need for generating resources to deal with the COVID-19 medical emergency on priority, Amarinder ordered expenditure cuts by all government departments to meet urgent expenses needed to deal with the current crisis.

He has asked all the state departments to submit detailed proposals, by April 8, on expenditure cuts to be made over the next few weeks.

“We have to save people, that should be our priority,” said the Chief Minister at the meeting of the Council of Minister, adding that resources have to be made available to Health, Police and other concerned departments directly involved in the current battle, which threatens to be a long one.

With no additional revenues coming in, the only way out was to cut expenditure, he stressed, adding that every department would need to make cuts in order to generate revenue for the critical care services.

Finance Minister Manpreet Badal earlier told the Cabinet that the state would suffer Rs 5,000 crore in revenue losses in April, and the figure was expected to go up further in the absence of revenue from GST and petroleum taxes.