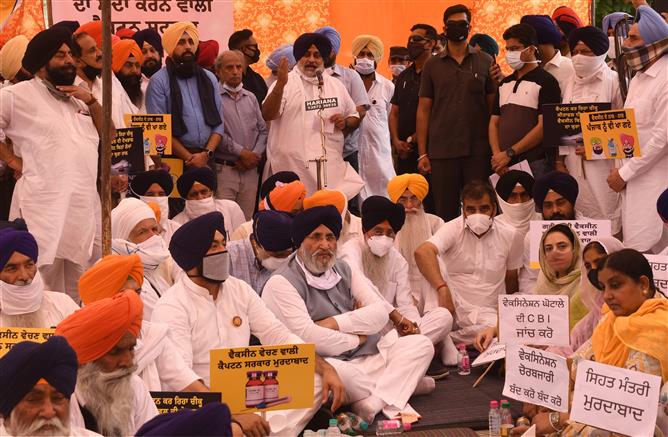 Former deputy chief minister and others of his party hold a protest against Balbir Singh Sidhu over the vaccine scam allegations in Phase 7, Mohali, on Monday. Tribune photo: Vicky

Several leaders from the opposition, among them Shiromani Akali Dal president Sukhbir Singh Badal, were booked under several sections of the Indian Penal Code and the Disaster Management Act for having gathered to hold a protest in the middle of the Covid-19 pandemic, police said.

Both parties were holding protests against Punjab Health Minister Balbir Singh Sidhu outside his residence in Mohali's Phase 7 in violation of orders from the district magistrate, the police said.

They have been booked for disobeying a public servant (Section 188) and doing an act that is likely to spread infection (sections 269 and 270) of the Indian Penal Code as well as obstruction (section 51-A) of the Disaster Management Act.