No clarity on rules in state | Local wholesalers jittery 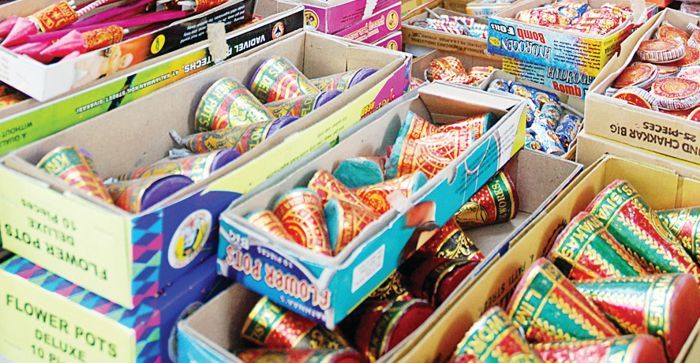 With Delhi banning the sale of firecrackers ahead of Diwali, wholesalers in Punjab are being offered heavy discounts by their Delhi counterparts. However, with no clarity on rules in Punjab, wholesalers are still jittery about storing firecrackers in excess. From the last two years, the state government has been enforcing stringent norms, allowing only a two-hour window for bursting crackers.

We will also follow the National Green Tribunal guidelines issued recently pertaining to crackers. We will move a proposal to the government for formal orders for stringent check or complete ban on crackers. —Karunesh Garg, member secretary, PPCB

The Delhi Government recently announced a ban on the production, distribution, storage and sale of firecrackers ahead of the festive season. A formal notification in this regard was made by Delhi Minister for Environment Gopal Rai, who said the ban would be in force till January 1, 2023.

Every year in October and November, farm fires in Punjab and Haryana adversely affects the air quality, affecting people in Delhi and NCR.

Meanwhile, the state government is yet to take a decision in this regard with officials confirming that there was still no information on where the green crackers could be purchased in the state. “We will wait for an official order from the state government as Diwali is still six weeks away,” said a top official privy to the developments. “We will see if we can ask respective Deputy Commissioners to ensure that crackers are not stored before any formal orders,” he said.

Information gathered by The Tribune reveals that after the ban was announced in Delhi, wholesalers from Delhi have been calling up their Punjab counterparts and offering heavy discounts and subsequently, the rates of branded green and other crackers have declined by 20 per cent.

“In case of down payment, the discount touches 36 per cent over and above the existing discount,” said a dealer from Malerkotla. “The discounts on banned items are even bigger. We have to clear our stocks, whatever it takes,” said another dealer from Patiala, who is in the cracker trade from the past 10 years.

“Our super stockists in Delhi are offering discounts on crackers exceeding 20 per cent and with down payments in cash, it touches 36 per cent over and above the discount,” said Gagan Kumar, a wholesale dealer from Ludhiana’s Daresi road. “However, in the last three years, the sales have declined due to checks on sale of crackers and limited time offered to fire crackers in Punjab. We will discuss with dealers and take a decision,” he said.