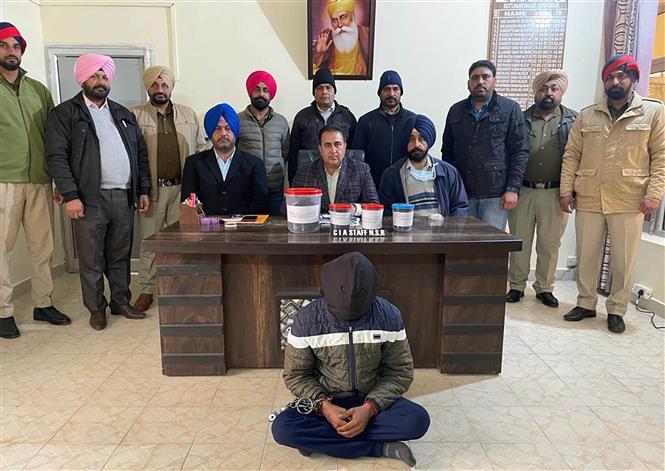 Director General of Police (DGP) VK Bhawra on Thursday, said, “The recovery was made on the disclosure statement of accused Amandeep Kumar, alias Mantri of Lakhanpal village in Gurdaspur, who is the prime accused in the two recent incidents of grenade attacks in Pathankot.”

Notably, Mantri was among the six operatives of the ISYF arrested by SBS Nagar Police on January 10, who confessed to have carried out two grenade attacks in Pathankot, including at the Pathankot Army camp. The police had also recovered six hand-grenades (86 P), a pistol (9mm), a rifle (.30 bore) along with live bullets and magazines from their possession.

Nawanshahr Senior Superintendent of Police Kanwardeep Kaur siad following the revelations made by Mantri, they sent teams to Gurdaspur and recovered the explosive material, which was to be used for assembling IEDs.

Director General of Police said the consignment was provided by Pakistan-based chief of ISYF Lakhbir Singh Rode to Amandeep through his handler, Sukhpreet Singh alias Sukh of Kharal village, in Dinanagar.

Lakhbir Rode has figured prominently in operationalising a series of terror modules through his network in Punjab and other countries. A large amount of militant hardware, including RDX, tiffin IEDs, explosive material for assembling IEDs, hand grenades and firearms, and contraband had been pushed by him across the International Border using drones, said the police.