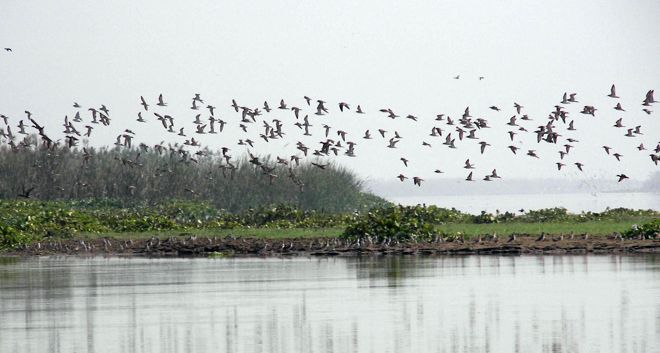 In a survey, 91 species of water birds were recorded at six protected wetlands. File photo

Going beyond its yearly exercise of a water bird census of the protected wetlands of Punjab, the Forest and Wildlife Preservation Department has started an exercise to map nearly 700 of the 1,445 natural and man-made sites for migratory birds, spread across 21 districts of the state.

Based on satellite imagery provided by the Centre, wildlife officials have identified 700 such sites — mostly in Bathinda, Faridkot, Kapurthala, Muktsar, Patiala, Ropar, Sangrur and Mohali.

Once an area was identified and brought under provisions of wildlife protection, a census exercise of the migratory bird species would be carried out, said Principal Chief Conservator of Forests RK Mishra.

Migratory birds make their way to different wetlands of Punjab and other parts of the country through the central Asian flyway. Migratory water birds have been sighted at several man-made and natural wetlands outside the protected ones in Punjab.

In January and February this year, the department, with the support of WWF-India, had conducted a “species richness” survey of the protected wetlands of Punjab. In the survey, 91 species of water birds were recorded at six protected wetlands — Kanjli Wetland, Ranjit Sagar Conservation Reserve, Keshopur-Miani Community Reserve, Harike Wildlife Sanctuary, Ropar Conservation Reserve and Nangal Wildlife Sanctuary.

Quoting the National Wetland Atlas, 2011, officials say the state has an impressive range of biodiversity within the inland water ecosystems. There are 1,381 big wetlands (area more than 2.25 hectare each) and 5,049 small wetlands (area less than 2.25 hectare each). This together forms an estimated wetland area of 86,283 hectare, which is 1.71 per cent of the total geographical area of Punjab.

Based on satellite imagery provided by the Central Government, wildlife officials have identified 700 such sites — mostly in Bathinda, Faridkot, Muktsar, Patiala, Kapurthala, Ropar, Sangrur and Mohali.