They are adamant till the time killers are not arrested, they would not cremate the body and would continue their protest 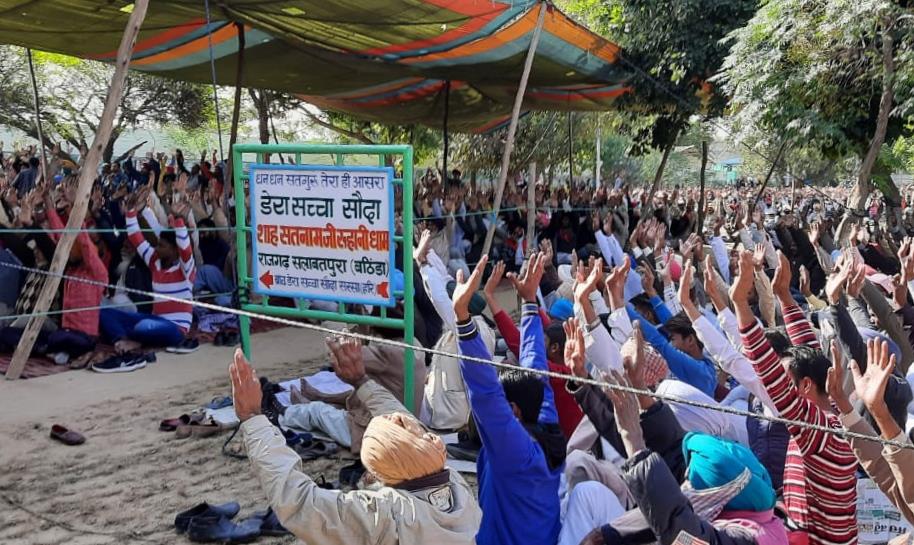 The Dera Sacha Sauda followers continued their protest for the third day at their state headquarter at Salabatpura as police failed to arrest the accused even after passing of more than 72 hours of the murder of dera member Manohar Lal.

As dera followers gathering is swelling at Salabatpura, DGP Punjab Dinkar Gupta on Monday reached Bathinda where he held a meeting with police officials to review the situation here.

It is learnt that he will submit his report on the ground condition to Chief Minister Amarinder Singh.

As the state government this time is in no mood to take any chances as Bathinda was the epicentre of the dera-Sikh clash in 2007, government don’t want any escalation towards that point.

The Dera Sacha Sauda sect wields a considerable influence in the Malwa region of Punjab.

Moreover, pressure is mounting on the police to nab the killers as police has entire CCTV footage of the incident and even Sukha Gill Lamme gang has taken the responsibility on the social media about the killing, despite this Bathinda police and cyber crime cell have failed to get any breakthrough in the case yet.

Although, Bathinda police have got the Facebook ID of Sukha Gill deactivated from which the post regarding this was uploaded.

It is also learnt that even discussions pertaining to the farmers’ agitation “Delhi Chalo” on November 26 was also held in the meeting.

Dera followers are adamant that till the time killers are not arrested, they would not cremate the body and would continue their protest.

Followers claimed that this is not the first time that a dera follower has been targeted as seven murders of the dera followers have been taken place in the recent past and every time they have been given assurance by the administration, but they have not given justice till date.